Devante Dailey led the Cardinals going 2-for-3 with two runs scored in the win.

Neither team found offense as the game opened in the first inning as both went three up and three down.

The Tigers landed on the scoreboard first in the top of the second as Jimmy Overstreet ripped a double and scored on a single by Justin Walden to give their team a 1-0 lead.

The Cardinals responded in the bottom of the inning as Randy Johnson made it around the basepath to tie the game at one.

Logan Stacey helped the Tigers grab a 2-1 lead in the top of the third, but two runs by Devante Dailey and Ja’Bryce Hooks allowed the Cardinals to pull ahead 3-2.

The Tigers took the lead back in the top of the fourth 4-3 as Overstreet scored his second run of the game and Walden recorded his first.

Down one run heading into the bottom of the fourth, the Cardinals found magic at the plate as they scored nine runs.

The order batting around was enough to run out the time on the game and give the Cardinals a 12-4 win.

The United Bank Warriors made the most of the first inning and pulled away from the First National Bank & Trust Athletics picking up a 6-1 win in Cal Ripken Major League action at Tom Byrne Park.

Ryan Johnson had the shot of the game and the only highlight for the Athletics as he led off the top of the first with a homerun giving his team their only lead of the game.

After Johnson’s homerun, it was all Warriors as they scored four runs in the bottom of the first with Billy Powell, Arri Torres, Tadd Huskey and Justin Johnson scoring.

Defensively, the Warriors were most impressive from the mound as Billy Powell kep the Athletics at bay recording 10 strikeouts including the entire side during the top of the third.

Torres was the star at the plate for the Warriors as he scored three runs with his final two runs coming in the bottom of the third and fifth innings to help push the Warriors to a total of six and the win. 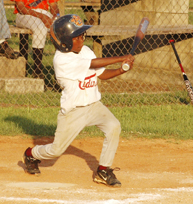