School is out for the summer, but the Escambia County Blue Devils are still on campus putting in work in order to have a successful 2010 football season.

Tuesday marked the opening of summer workouts for the Blue Devils, who will be hitting the weight room every week on Monday, Tuesday and Thursday.

The first two days of workouts saw more than 60 players take part in the summer program.

Blue Devils Head Coach Mark Heaton said numbers are looking good with more expected to join in the next week.

“We had 65 guys on Tuesday and Thursday, and expect more next week,” Heaton said. “We have some guys out of town with family and others are participating in Boys State, so we should have aruond 75 when they are all here.”

The Blue Devils are working out in two groups with lineman beginning at 7 a.m. and skill players following them when they are out of the weight room.

Heaton said the players are working on lifts and conditioning skills.

“The lineman come in first and do speed drills followed by stretching and lifting,” Heaton said. “When they go outside, they work on specific skill drills and the skill players follow that routine after them.”

For the first two workouts, the Blue Devils have shown their coach promise.

Heaton said he sees them getting in the habit of working out and learning how things will be.

“They are still learning, but they have done a good job this week with coming in and working hard,” Heaton said. “It’s a new adventure everyday, but they will get it all eventually I can tell that they are progressing in the weightroom though. They are picking up how workouts will be and adjusting well.”

The one thing that is still missing for the Blue Devils are leaders.

Heaton said he hopes leaders emerge before the summer is over.

“We need some people to step up and become accountable for their teammates,” Heaton said. “Until we find someone who is going to take it personal when their teammates aren’t doing something right then we won’t see much progression. Once some guys step up as leaders then we will see more success.” 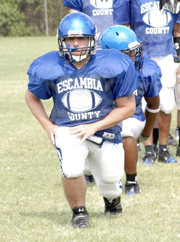