YMCA in need of renovations

With the search for a new executive director underway, the Atmore Area YMCA needs more than just a new face to represent the organization.

The building that houses the YMCA, which holds historical value being it was the first campus of Escambia County High School, is in dire need of renovations and repairs.

Several things in the building need an overhaul including windows, doors and the roof.

Ross Terry, youth sports director for the YMCA, said a lot of work has been done since Hurricane Ivan did damage to the building in 2004.

“Since Hurricane Ivan hit, there has been almost $1.5 million spent on renovations,” Terry said. “We replaced the upstairs windows with vinyl top windows to prevent rotting. The building was also painted, spots on the roof were repaired and there was work on the floor in 2006 due to termites eating away at the joists.”

The current issues that Terry would like to see repaired are the downstairs windows and the back doors.

Terry said the windows are falling apart, which could lead to problems with the renovated floor, and believes adding new doors would help with safety.

“The windows are rotting, and if they continue to rot then the leaks that come through will undo the work that has been done to the floor,” Terry said. “As for the doors, it’s a safety precaution because if we can get fire doors then we can prevent them from being opened unless they need to be. Having a new roof put on the building would be great, but it’s not feasible at this point in time.”

The problem with having the renovations to the Y done immediately deals with finances.

Terry said that any donations the Y receives would be great due to the organization losing one of its main funding sources.

“Donations would really help especially with the W.T. Neal Trust ending our funding at the end of the year,” Terry said.

The Atmore YMCA is a 501©3 non-profit organization and any donation made is tax deductible. For more information or to donate, call 368-9622. 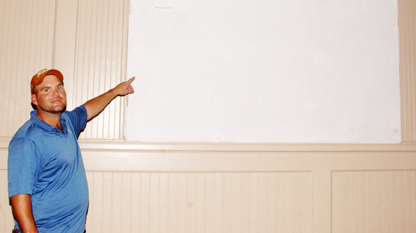 One Escambia County Blue Devil is receiving the opportunity of a lifetime when he will visit Omaha, Neb. for a... read more