The All-Stars finished 0-3 in the tournament falling to Grand Bay, Tillmans Corner and Semmes in competition.

The team was led by coaches D.D. Poole, Larry Nichols and Hub Wilson.

The Atmore 10-year-old Cal Ripken All-Stars put on their strongest performance of the District 6 tournament in their final game falling 8-5 to Grand Bay’s All-Stars.

Atmore put up a fight holding the lead for the first two innings before falling off in the final inning of play.

Grand Bay opened the game on a tear scoring four runs with Adams, Rodgers, Ellis and Jackson all scoring runs to put their team up 4-0. Adams and Rodgers had the best hits in the inning with both ripping singles.

Atmore responded in the bottom of the first scoring five runs to take the lead 5-4.

Delarrian Poole started the scoring for Atmore as he crossed the plate first, and he was followed up by JaMaya Frye, Freddrick Flavors, JaBryce Hooks and LaShaun Robinson who all made it around the basepath.

Atmore held its lead through the second inning as neither team could get anything going with their bats.

Grand Bay tied the game at five in the top of the third inning with Williams reaching base and being knocked in by Ellis’ single.

Atmore failed to respond in the bottom of the third as they stranded three runners on base.

Grand Bay took control of the game in the final inning with three runs scoring as Rodgers, Williams and Clark all scored to give their team the 8-5 victory.

Neither team was able to open up any offense in the first two innings as they both went down in order.

Semmes found their stride in the third inning scoring two runs with Wesley Brooks and James Ward both crossing the plate.

Atmore’s 10-year-old Cal Ripken All-Stars did not open their District 6 tournament the way they wanted falling 17-0 to Tillmans Corner on June 26 in Grand Bay. 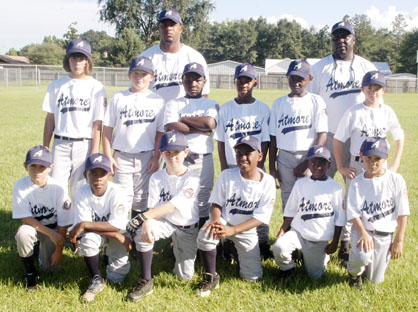 With just more than a month left before school starts, the Northview Chiefs cheerleaders are already preparing for the upcoming... read more