Being a coach is a huge responsibility due to all of the jobs and rules that coaches have to follow.

Keeping up with rule changes is one of the largest responsibilities for a coach because the rule might deal with the safety or play of their players.

One rule that has been changed by the National Federation of High School Associations involves concussions and the upcoming football season.

The NFHS made changes to the concussion rule to ensure the safety of athletes on the gridiron.

The rule now states that if a player shows signs, symptoms or behaviors associated with a concussion, that player must be removed from the game and shall not return to the playing field until cleared by a medical doctor under AHSAA rules.

Previously, the rule only stated to remove players who were “unconscious or apparently unconscious.”

Escambia County Blue Devils head football coach Mark Heaton said the rule for concussions has been changed to help with overall safety of the athletes.

“The state and the NFHS is putting a big emphasis on concussions and how to manage them,” Heaton said. “The state wants coaches to know the proper procedures on how to handle concussions. The key principle they are pushing is if a player has the symptoms of a concussion, they cannot play, practice or do any strenuous exercise until they are cleared by a medical physician.”

A reason for the change in the rule were results from studies pertaining to athletes and concussions in all sports, not just football.

Heaton said the NFHS wants to help better the standards and procedures in high school sports.

“Naturally, the NFHS are always looking to better the medical standards that are involved with high school athletes and sports,” Heaton said. “There were studies done to find the amount of concussions that were happening in high school sports, and the numbers were high. They want coaches to know the severity that concussions can have on an athlete’s mind and body. It’s also something for us to know about since we don’t have trainers or medical staffs on call 24 hours a day. They want us to be able to recognize and handle the situation if we have one. It’s about creating a safer environment.”

Before the coaches can touch the field, they are required to go through courses and seminars to help them deal with their athletes.

Head coaches like Heaton have to carry even more responsibility other than the courses.

Heaton said every coach must handle these responsibilities to have a stable program.

“With coaches in general, we have to have a principles course, first aid course, be CPR certified and to go through the STAR sportsmanship course,” Heaton said. “Now, we also have to pass the concussion course, so we know how to manage a concussion. Head coaches also have to attend mandatory rules clinics, make sure our players are physically and academically eligible and have each player pass the STAR sportsmanship test. It’s a lot of things to handle, but it helps our program.”

As for dealing personally with players on concussions and other injuries, Heaton and his coaching staff tell the players to constantly report their injuries.

Heaton said he never worries about a player not telling him about something that might be wrong.

“We tell our kids constantly to come to us with any injuries no matter how minor it might be,” Heaton said. “We don’t want them to leave this campus with something minor that turns major. I know sometimes a kid tries to tough through it, and while that’s admirable, it’s not something they need to do. You can prevent injuries by treating them at an early stage. Our kids need to understand that if it’s not treated they could further their injury by not telling us.” 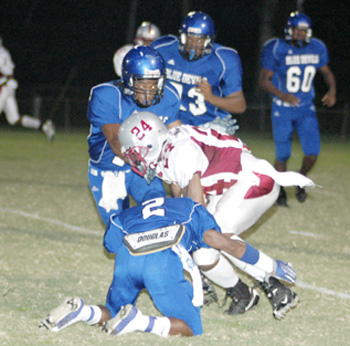 Hits like these could result in a concussion. A rule change made by the NFHS states if a player shows signs or symptoms of a concussion that they must be removed from the game. | File Photo

The search is over for the assistant coaches that will serve with new Escambia County head football coach Mark Heaton... read more