Also winning awards were the junior varsity squad which finished as runners-up in the Cheer Camp State Championship. They finished second in Home Pom and extreme routine at the camp.

Winning the Leadership Award was a big deal for the Cougars because of the size of their squad.

Rachel Fuller, captain of the Cougars cheerleading squad, said she does not know of any small schools that have won the award.

“It’s the most prestigous award because it is voted on by our peers,” Fuller said. “We don’t know of any small squads who have ever won it becuase it usually goes to large or medium squads.”

Individually, the Cougars had several members of both varsity and junior varsity chosen for honors.

As varsity members, Bryan and Thompson have the chance to perform in London on New Year’s Day, while Lassiter and Sasser have the opportunity to perform on Thanksgiving at Disney World.

Bailey Vaughn was selected as an AISA All-Star, which allows here to cheer at the AISA All-Star basketball and football games.

Three other members of the squad were chosen for Pin It Forward: American Needs Cheerleaders with Amber Huskey, Page Lancaster and Sasser all receving pins.

Each cheerleader that was selected as UCA All-American will be looking for corporate sponsors to support their trip. Anyone intersted may contact Escambia Academy at 368-2080. 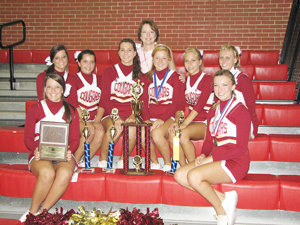 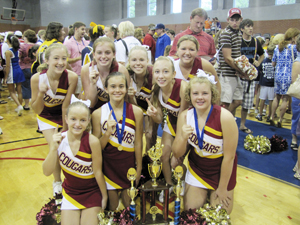 The Atmore 13-year-old Babe Ruth All-Stars finally met their match during their final game Sunday night at the 13U Alabama... read more