Cougars open season ranked at No. 9

After an impressive run to the AISA state semifinals last season, the Escambia Academy Cougars are returning this season with a bulk of their roster, which is not a secret to voters with the Alabama Sports Writers Association.

In the ASWA’s preseason poll, the Cougars come in ranked at No. 9 giving them their first ranking since 2005 when they made it as high as seventh in the AISA Top 10.

Cougars head coach Heath Gibson said it was nice to be recognized as one of the AISA’s Top 10 schools coming into 2010.

“It feels pretty good,” Gibson said. “On one hand, your excited to see your team getting recognized as a top team, but on the other hand, you hope your team doesn’t read too much into it, and goes out to play football.”

Coming into a season could do one of a few things to the Cougars as news of their ranking progresses.

It could motivate them or even cause them to fall, but one thing it does is make it known that they are seen as a strong team. Gibson believes being ranked puts a target on the Cougars’ backs.

“I think it puts a target on us,” he said. “Teams are going to see that, and they will want to knock us off. It will motivate them to play harder, so they can knock us from that ranking and help their status.”

For more on this story, see Wednesday’s edition of The Atmore Advance. 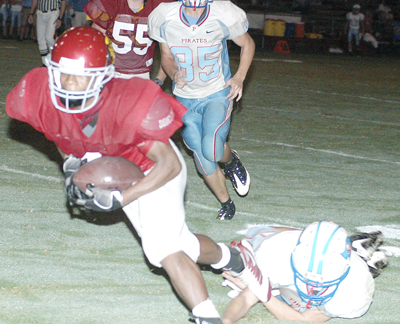 The Escambia Academy Cougars enter the 2010 season ranked at No. 9 among AISA schools. | File Photo

For three days, the Escambia Academy Cougars were put to the test by their coach as they attended the team’s... read more