The City of Atmore agreed during Monday’s council meeting to join forces with its neighbor to the south in applying for federal grant funds.

Bay Minette Mayor Jamie Tillery was on hand to propose the regional approach to applying for Tiger II Planning Grant funds in preparation for the impact of the HK Motors plant planned for construction off Hwy. 31 a mere 14 miles south of Atmore. She said a collaboration of this nature, between two cities, is monumental.

“This has never been done before where two cities, especially across county lines, have applied for federal funds together,” she said. “Why do we do it? Because any way we can get the federal government to look at us, we’re going to push that. As we look at HK Motors, we know that this is a long-term project, we know that there are several guidelines and regulations that have to be met, but we know that we have got to get ready, and we’ve got to be prepared. This has got to be done through great planning and this is why we use the grant. In this recession, that’s one thing we can do, we can plan, and we cannot just do it as an individual city, we’ve got to collaborate together, we’ve got to cooperate together, we’ve got to listen and communicate. This whole region will benefit.”

Atmore’s Industrial Development Board was first approached with the idea during its monthly meeting held last Thursday. Tom Grange and Christopher D. Baker, AICP with Hutchinson, Moore & Rauch, LLC. in Daphne were on hand to give the board specifics to the advantages of partnering with Bay Minette, the primary sponsor of the grant.

“It’s a grant that will have some far-reaching, regional impacts, especially this way towards Atmore,” Grange said last week. “The key things are that we’ll be brief and we are not asking for money.”

Baker then explained some of the ins and outs of the grant.

“What I wanted to bring to your attention today is an opportunity that we’ve been working with the City of Bay Minette and Mayor Tillery on for a while,” he explained. “It’s a funding opportunity that’s out for advertising and the grant is due by the end of August. It’s a Tiger II Planning Grant, a program jointly administered by the U.S. Department of Transportation and the U.S. Department of Housing and Urban Development (HUD).”

According to Baker, the grant seeks to fund “creative, region-wide planning projects nationwide.” The grant allows for $75 million to be awarded in a competitive selection and applications are eligible for 100 percent funding.

When Tillery first learned of the grant, the HK Motors facility, which would develop natural gas hybrid vehicles, came to mind, as well as the potential for spin off manufacturers and suppliers for neighboring cities throughout the state.

“Right now in the State of Alabama, we are the area of hope, the area of growth,” she said Monday. “We know that tourism needs help and so does industry, we need careers that people can start and advance in. We want people to buy their homes, raise their families and grandchildren and turn back around and call this their home.”

During his address to the IDB, Baker explained that the biggest “beneficiary” other than Bay Minette from the HK Motors plant, which would span from Hwy. 31 to Interstate 65, would be Atmore.

“If you think about it, there’s going to be the whole supplier base that goes with it; steering wheels, seats, tires, batteries,” he said. “So the region is going to be competing against other areas around the country. So what we are trying to do is position the region, which includes Atmore and Bay Minette, in a position to earn as many of the suppliers to come to the area as possible.”

According to Baker, the competition will be between other neighboring cities within 90 minutes of the HK Motors plant.

“The goal is to employ as many local people as possible because that has the greatest economic impact,” Baker said.

Baker added that the initial scope of the project would include, refocused city and regional planning, specific corridor plans including traffic studies, workforce development partnerships with local colleges and transportation options that would connect neighborhoods, schools, downtown parks and other community focal points with sidewalks, trails and bicycle paths.

Following the presentation, members of the IDB approved a recommendation of a letter of support of the joint effort to the council, which passed it unanimously Monday.

“We are excited about the opportunity,” Atmore Mayor Pro-Tem Jim Staff, who presided over the meeting, said. “The plant is going to benefit us as much as it will Bay Minette. It’s going to be right between the two cities and it would not be a wise decision not to partner with them. It may be unique enough that the government will look at it as unique and smile at it and award us the funds. We are all for it.”

The grant is due by Aug. 23 and a decision will be made after Sept. 15, but no specific date has been issued, according to Grange. 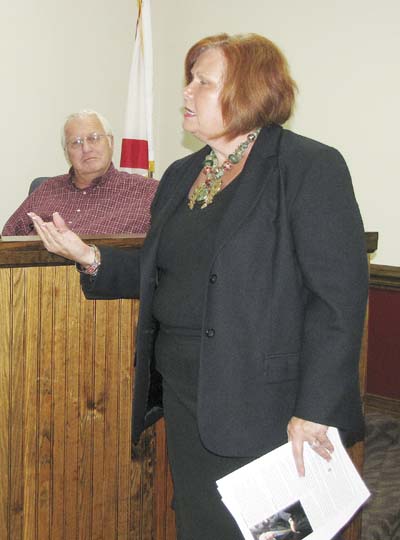 Heat may have been the only enemy for teachers and students returning to school Monday. Principals at area schools reported... read more