A police officer in pursuit of the car that hit and killed T.R. Miller Principal Donnie Rotch Wednesday night had backed off from the chase when he saw the car driving erratically, Police Chief Monte McGougin said Thursday.

The driver of the car leading the pursuit, Samuel Martin Reid, 39, of Brewton — a graduate of T.R. Miller — was also killed. His family members have questioned the need for the chase.

According to court records, Reid pleaded guilty in 2007 of reckless driving. He had originally also been charged in Brewton Municipal Court with attempting to elude police and driving while his license was suspended. He was sentenced to one year of probation.

In a press conference Thursday, McGougin said the officer — who he did not name — had slowed behind Reid’s red 2006 Pontiac Grand Am and did not see the actual collision, which happened farther up the highway.

The officer arrived on the scene and immediately determined the two drivers were dead.

The entire incident, which began in the parking lot of the police department, took two minutes, McGougin said. Speeds of the vehicles have not been determined.

The incident began when the police officer arrived at the parking lot of the police station and saw a white woman and black man engaged in a “physical altercation” in the red Grand Am, McGougin said. “The door of the vehicle would repeatedly open and close, open and close,” he said.

When the officer approached the car, the driver sped off. “The officer gave chase,” McGougin said.

When the Grand Am pulled out in front of the police station, the woman “was exited” from the car, McGougin said.

The pursuit began at the police department and ended at the city limits north of Walmart on U.S. 31, he said.

“When the officer saw the driver driving erratically, the officer put a great distance — it’s not known at this time — between them,” McGougin said.

Reid was trying to pass a vehicle occupied by a family from Florida when the crash occurred. Those witnesses stayed on the scene and have given statements to police, McGougin said. Their car was damaged by the debris from the crash, but no one in their car was injured.

The state troopers homicide division is in charge of the investigation, and the police officer involved has been put on administrative leave with pay, McGougin said.

“This is very hard for the police department,” said McGougin, who will serve as a pallbearer in Rotch’s funeral today. “This is hard for me also. One of these men was a classmate, and one was a dear, dear friend.”

The officer involved in the pursuit was also a T.R. Miller graduate.

“This is very hard for the officer involved,” McGougin said. “He was a student at T.R. Miller and played baseball for Coach Rotch. He is taking this extremely hard.”

“The corporal went with our policy,” McGougin said. “He saw a lady being tossed from a vehicle. He was well within the policy of the City of Brewton to chase.”

Family members of Reid attended Thursday’s press conference and said they believe police should not have pursued a chase.

“I feel like it’s a situation that could have been prevented,” said Mia Reid, Reid’s sister. “I know my brother is not a saint, but this shouldn’t have happened. He was not the principal, but we loved him just like people loved Coach Rotch.”

Robbie Grace, a coach at W.S. Neal High School, said he was stopped in the southbound turn lane between Piggly Wiggly and Walgreens on U.S. 31 when the red car approached him and nearly sideswiped his vehicle.

“I never saw the car until it was right in front of me,” Grace said. “I think the guy swerved not to hit me. He was going so fast I couldn’t tell what color the car was.”

Grace said the police car was close on the Grand Am’s heels. “He was going every bit as fast as the other car,” Grace said. “All I saw were blue lights.”

Grace said he was so upset by the incident he went to the police station not long after, before he found out about the fatal wreck.

But Lauren Mancil, who lives on U.S. 31 less than 100 yards from where the cars collided, said she saw the red car speed by her house. She heard the crash before she ever saw the police car, which she estimated was in front of the church at the time, as McGougin said.

Lee McDaniel, a representative for Balfour, which furnishes class rings to students, had been playing golf with Rotch at the Country Club of Brewton before the crash. He was driving just ahead of Rotch on U.S. 31 as they headed back to town.

“I always ride with Donnie but this time I had my son with me, so I drove my car,” McDaniel said Thursday. “When we left the club, I knew that he was only 60 seconds behind me. We didn’t know what was happening back at the scene of the accident. We had passed a car that was driving so fast I couldn’t even see what color or make of the car. I made the comment that if that person got caught driving at that speed, they were going to be in a heap of trouble. My son and I went back to our motel room. Someone knocked on the door, but I don’t usually answer door knocks at night. They kept on knocking, and I finally opened the door and found out what had happened.” 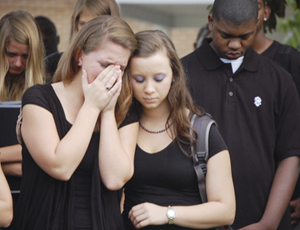 Following in the steps of two “visionaries,” Susan Mack knows she has some big shoes to fill. Six years ago,... read more