A box of bicycle inner tubes discarded from a failed project became the very materials used in a product that has turned Kathleen Nowak Tucci’s work into an international sensation.

Tucci, an Atmore artist, has been recognized for her artistic talents most recently in the jewelry making industry.

“I’ve only been creating this jewelry for about six months,” Tucci said. “To be recognized like this is absolutely mind blowing and surreal.”

The recognition for her artistic jewelry production has landed the artist on the cover of an international publication known for having a pulse on the fashion world.

“Vogue Italia’s” August issue features a model wearing one of the pieces designed by Tucci. The piece is just one of at least three shown in the 24-page photo spread in the magazine.

The issue entitled “The Latest Wave” was styled by Karl Templer and photographed by Steven Meisel using the theme of water and oil. The model, Kristen McMenamy, interprets images of the environmental drama that is afflicting the Gulf Coast. Tucci is the first eco artist to be featured on the cover of a mainstream fashion publication.

“I never considered this glamorized,” Tucci said. “I thought it was disturbing and thought provoking and utterly fascinating in it’s interpretation of the struggle for survival. It is controversial and interpretative, which is indicative of great artistic expression.”

Tucci and her sister, Margaret Nowak Dobos, have created a company called “My Sister’s Art” that is promoting the one-of-a-kind pieces of wearable art. Tucci credits her sister as the mind behind the designer.

The recognition in an international magazine is just part of the joy Tucci has found when it comes to her jewelry design.

Currently her pieces, which range in price from $75 to $2,000, are being sold in high-end fashion boutiques and shops in California and New York and other boutiques across the country

“It’s amazing and unbelievable how all of this happened,” Tucci said. “When my sister saw some of the pieces she asked for more. She knows the fashion industry and knew this would be something unique. I began to work on more pieces and just started making up ways and playing with it. I started sending boxes of jewelry to my sister and she kept asking for more.”

Those pieces are getting exposure through venues like international gift shows in New York. The pieces will also be presented to potential clients during the Ateler designer show set for next month in New York City, Tucci said.

Tucci has been creating art, including one-of-a-kind lamps, for 25 years. She has shown her work in private, corporate and university collections nationally and internationally.

Tucci said major bookstores including Barnes & Nobles will have limited copies of the upcoming issue of “Vogue Italia” within the next several days.

To see a sampling of the jewelry created by Tucci, visit the company’s Web site at www.mysistersart.com. 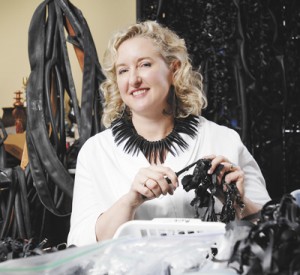 Atmore resident and artist Kathleen Tucci is pictured wearing and working on one of her necklaces featured on the cover of the August ‘Vogue Italia.'|Submitted Photo 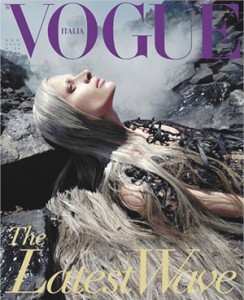 A police officer in pursuit of the car that hit and killed T.R. Miller Principal Donnie Rotch Wednesday night had... read more