Escambia County Superintendent Billy Hines was breathing a sigh of relief Friday morning following a traffic accident in the Robinsonville Community involving one of the county’s special needs buses and a Poarch Tribal Police vehicle.

Hines said he was grateful that none of the children on board or the driver were injured as a result of the crash, which occurred at 6:30 a.m. on Robinsonville Road at the intersection of Brazzell Hill Road.

“The students are OK,” Hines said Friday afternoon. “We only had two high school students on the bus at the time of the accident. We contacted the parents of the students, so they knew what happened, and we later watched the video that was on the bus. The video showed that there was not much impact for those aboard and that the children were sitting in the back.”

Betty Kiser Pruett of Atmore, a 27-year veteran bus driver, was behind the wheel of the 1993 International bus when the 2010 Dodge Charger driven by Lt. Rex Alexander Baggett, who has been on the Tribal police force for seven years, struck it in the passenger side.

Hammonds said Baggett gave him a report of the accident following his release from the hospital. He stated that Baggett told him he was traveling south on Robinsonville Road approaching Brazzell Hill and the school bus was traveling in the opposite direction.

“It appears that the bus was attempting to turn to the left and Lt. Baggett swerved to miss the bus, but just did clip the passenger side corner of the bus,” Hammonds said. “He then went through someone’s fence and struck a tree. The lucky thing is that none of the children or the bus driver were hurt.”

Baggett’s cruiser came to rest in Eddie and Lula Ballard’s front yard located at 1160 Robinsonville Road. The couple gave a recount of what they heard as the Alabama State Troopers office investigated the accident.

“We were in the bed,” Eddie Bullard said. “I heard a loud bang. I guess it’s when he hit the tree.”

Initially, the couple thought someone had fallen inside their home.

“When I looked outside, I saw the officer slumped over in the car, and I thought he was badly injured, so I came inside and called 911,” Lula Bullard said. “I then went to the bus and checked to make sure she was OK too.”

Hammonds said he was just thankful no serious injuries were sustained in the accident.

“It could have been really bad and we are thankful that no one got seriously hurt,” he said.

Hines did not release the statement from Pruett, stating he would await the outcome of the Alabama State Troopers Office’s investigation. He did state that board policy was followed after the accident.

“Anytime one of our vehicles is involved in any type of accident, we send our employees for a drug and alcohol screening,” Hines said. “We also have to file a report with the state reporting that there was an accident.”

Deputies with the Escambia County Sheriff’s Office and an officer with the Poarch Tribal Police Department assisted during the accident. 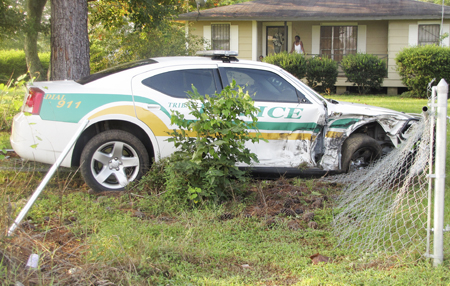 The Poarch Band of Creek Indians will receive a $58,831 grant to help establish a revolving loan fund (RLF) to... read more