One person was injured in a two-vehicle accident that occurred just before 2 p.m. at the intersection of South Carney and Owens streets Thursday.

Officers on the scene stated that a Nissan Altima driven by Dominic Kemp, 29, of Atmore and a Jeep Compass driven by Jennifer Stanley, 36, of Atmore collided sending the Altima into a bush in a nearby yard. According to the police report, Kemp failed to stop at the stop sign.

At the intersections, there are stop signs on Owens Street, but not on South Carney Street.

Personnel with Atmore Ambulance transported Stanley to Atmore Community Hospital for treatment of minor injuries, according to witnesses at the scene.

The driver of the Altima was not injured in the accident.

David’s Paint and Body towed both vehicles from the scene of the accident. 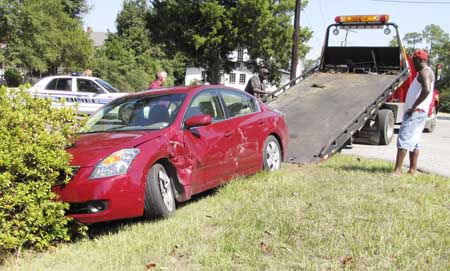 There was a two-vehicle accident Thursday afternoon at the intersection of Owens and Carney streets.|Photo by Adam Prestridge

In a stressed economy it’s tough to make budgets workable, but the Escambia County Commission passed a balanced budget during... read more