Teams are defined by greatness and nothing would be greater for the Escambia County Blue Devils then a victory over the No. 1-ranked Jackson Aggies this Friday when they visit Herbert Barnes Stadium.

The Blue Devils (5-2, 3-2) host Jackson in what will be their third region game of the season against an opponent ranked inside of the Top 10 of Class 4A.

Escambia County has already locked up a playoff spot, but winning this game could help them earn a higher spot in the final standings.

Blue Devils head coach Mark Heaton said he wants to have his players ready to play a strong opponent Friday.

“We are going to continue working on the things that we already do,” Heaton said. “We’ll throw a wrinkle in here and there, but we are just going to focus on sticking with our plan. Our main focus is having the kids prepared emotionally and mentally in order to have a chance to win here at home. That’s the good news — we have them here at home, so we like how that helps our chances.”

The Blue Devils have an idea of what it will take to win against the Aggies having already played Thomasville and UMS-Wright, the other Top 10 opponents in the region.

Heaton said he thinks his team has learned a lot in their two losses to the Tigers and Bulldogs.

“I think they know it will take fundamentally sound football,” Heaton said. “The difference in a game like Thomasville and the one against UMS-Wright is we just weren’t sound as a team against UMS. Against Thomasville, we just had some breakdowns. The key is avoiding those mistakes and playing fundamental football.”

With the Aggies being another ranked opponent, the Blue Devils know they are in for a tough game.

Heaton said Jackson will bring a lot of different things at this time on both sides of the ball.

“Jackson is a lot more versatile on offense than any of the teams we’ve faced,” he said. “They are a power run team that will run straight at us. On defense, they are a lot like Thomasville in that they are very fast. They fly to the ball quickly and make plays.”

For his team to be successful, Heaton has seen where they need to improve and what players he will be depending on.

“We need to move the ball down the field better,” he said. “We are going to stay within our system, but we are going to move some guys around to see if they can help us in other positions. We need our running backs to step up this week and play physical. We need them to be downhill runners so we can control the ball and time of possession.”

As for how the Aggies see things against the Blue Devils, head coach Jeff Kelly said it will be a good game with teams fighting for position.

“This will be a big region game because its late in the season and teams are trying to better themselves in the standings,” Kelly said. “They are an awesome team that has improved remarkably this season. They went toe-to-toe with Thomasville, and I think it will be a great game.”

With the Blue Devils already in the playoffs, Heaton thinks some pressure is off of his team.

“I think its a load off of everyone’s minds that we are in the playoffs,” Heaton said. “We are still going to be pushing the team though because we want them to continue to play harder in the chance that we can finish higher in the region.”

The Blue Devils and Aggies kick off at 7 p.m. Friday night at Herbert Barnes Stadium. 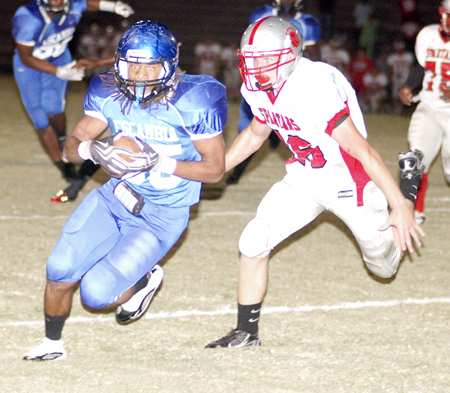 The Cougars of Canoe are in the midst of homecoming week and are preparing to host the Wilcox Wildcats in... read more