An entire new season begins Friday as the AHSAA playoffs start with 192 teams scheduled to begin their quests for state championships from Class 1A through Class 6A.

In Class 4A, the Escambia County Blue Devils finished No. 4 in Class 4A Region 1 and will travel to Andalusia to take on the Region 2 champion Andalusia Bulldogs for the first round.

The Blue Devils (7-3, 4-3) are back in the playoffs for the first time in three years under the leadership of first-year head coach Mark Heaton.

Heaton said he and his players are grateful they have the opportunity to play another game.

“We are excited that we are one of 192 teams that gets to continue football practice this week,” Heaton said. “I told the kids to be thankful that God gave us this gift. We will just have to take one game at a time because that’s all you can do with the postseason.”

Heaton said he expects to see Andalusia’s speed on both sides of the football.

The Bulldogs’ one loss is the only common opponent they have in the T.R. Miller Tigers. Andalusia fell 22-6 to T.R. Miller on Sept. 24 after the Blue Devils defeated them 35-34 to open the season.

Heaton said he does not see any help from looking at the film of a common opponent.

“It doesn’t really help,” he said. “Teams match up differently against other teams in different ways. We can’t judge the team off of what they did against a T.R. Miller. We need to be able to counter what they might try and do against us and our match ups.”

Offensively, the Bulldogs use a running attack to get the ball moving and control the tempo of the game.

Heaton said they can run the ball in several different formations.

“They really like to set up and run right at teams,” he said. “They run traps and iso plays and even run some option. They can also spread out though and run the veer and utilize their skill players well. They are a very versatile team.”

On the other side of the ball, the Blue Devils will be prepared for any kind of defense Andalusia might throw at them.

Heaton said he always prepares his team for more than one defensive scheme.

“Every week, we look at film and see what someone runs defensively,” he said. “Then come Friday, they have completely changed their look and show up in a different set. At practice, we give our kids the best chance by letting them see several different defensive schemes.”

Heading into the playoffs, the Blue Devils have shown how strong they have become over the last several weeks.

Heaton said he thinks his team has put it all together and is ready for the postseason.

“I think we have it together,” he said. “I think we showed how strong we are against Bay Minette. We played well in all facets of the game. Our kicking game was strong; our defense played well like it has all season and our offense is putting things together. I feel we are really strong heading into this game.”

The Blue Devils and Bulldogs kick off at 7 p.m. on Friday night at Andalusia.

Other Class 4A match ups include: 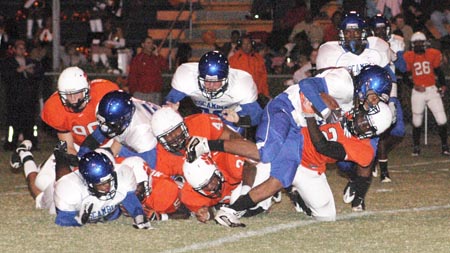 The Escambia County Blue Devils take on the Andalusia Bulldogs this Friday at Andalusia for the first round of the playoffs.|Photo by Chandler Myers

A season after reaching the AISA playoffs, the Escambia Academy Cougars will hang up their pads and wait for spring... read more