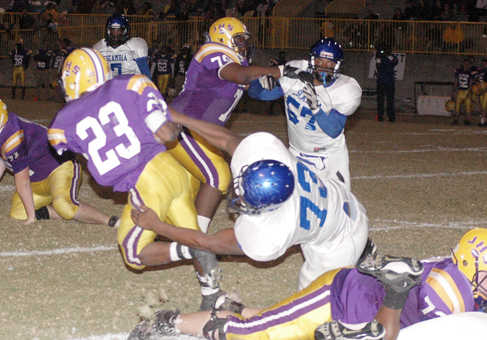 Since week one of the 2010 season, the defense of the Escambia County Blue Devils has caused chaos for opposing offenses including their regular season losses to UMS-Wright, Thomasville and Jackson.

One reason for that chaos has been the constant work up front by their defensive line.

Blue Devils Dalvin Craft, Montez Curry and Tyler Nero have put in work all season and worn down offensive lines in every game.

For Curry this is the first season he has played at defensive end after playing his previous seasons at defensive tackle.

He said he has had fun with the move to his new position.

“I’ve enjoyed playing defensive end a lot,” he said. “It’s a good move for me and with coach (Karl) Smith teaching me how to play the position, I have really liked it.”

One thing that works to Curry’s advantage on the defensive line is the players that line up with him.

Along with Curry, defensive tackles Tyler Nero and Dalvin Craft help form a formidable trio of pass rushers and run stoppers that give linemen for opposing teams fits.

Curry said having two bigger linemen help take some pressure off of him to make plays.

“Having Dalvin and Tyler on the line with me helps get guys away from me,” he said. “Offensive linemen think they can overpower me because I’m usually smaller than them, but I like being underestimated and coming up with big stops.”

For more on this story along with comments from Craft and Nero see Wednesday’s edition of The Atmore Advance.

Friday night football is quickly approaching and area residents have their pick of important games to attend, but be sure... read more