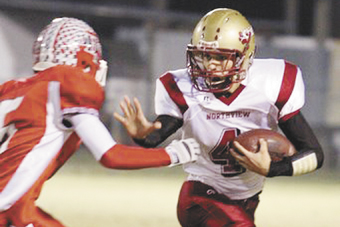 Northview High School senior running back Dustin Yuhasz stiff arms a Blountstown Tiger Friday night in the Chiefs’ road win in the first round of the playoffs.|Photo by A.J. Beachy

Blountstown jumped out to a late first-half lead over Northview Friday night, but it wasn’t enough as the visiting Chiefs scored 20 unanswered points to declaw the Tigers on their home turf 20-7 in the first round of the FHSAA state playoffs.

Chiefs head coach Sid Wheatley said his offense wore down the Tigers’ defense in the second half giving them the opportunity to capture the win.

“We kind of wore on them in the second half,” he said. “The offensive line did a great job blocking for Roderick Woods who had a tremendous night. He just pounded the ball inside and kind of took some of the bite out of them and wore on their defense. Brandon Sheets did a good job when he did not give the ball to Roderick and was able to pull the ball in, turn it up and get some key first downs for us.”

A Tigers 12-yard scoring run with 4:26 remaining in the second quarter was all the fuel the Chiefs’ offense needed to spark as they marched down the field and scored less than three minutes later on an 8-yard run by senior running back Roderick Woods. Place kicker Lance Bushaw added the extra point to tie the game at seven heading into the locker room.

The second half was all Northview as the Chiefs’ defense snuffed the Tigers, while the offense scored once in each the of the third and fourth quarters. Junior quarterback Brandon Sheets bulled his way into the end zone from one yard out with 5:15 left in the third to give Northview the lead. Bushaw’s kick was good making the score 14-7.

The Chiefs lit up the scoreboard once more late in the game as Woods scored his second touchdown of the game on a 3-yard run. The kick was no good, but the score was enough to give the visitors a much more pleasant ride back to Bratt, Fla. with a first round victory to celebrate.

“Our starting defense has played tremendous football over the last five games having only given up three touchdowns,” he said. “Any time you limit teams like that you have a good chance of winning. Our defense was great tonight. Our pass rushers also did a good job getting to their quarterback.”

Woods led the Chiefs’ offense with 133 yards on 26 carries.

Northview will play Freeport on the road next Friday night in a District 1A rematch. Wheatley said playing in Freeport would be a hostile environment with both teams only having one loss with the Bulldogs handing his team its only loss of the season 28-13.

“Freeport has got a very good football team that plays hard and is well coached,” he said. “They have won the region the past two years. The players are looking forward to playing them again. We are going to review previous film, make adjustments to see what benefits us and go out and play hard.”