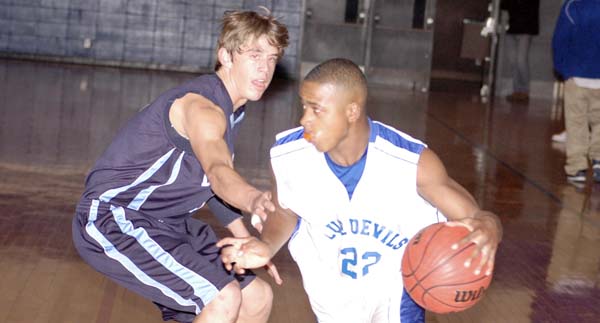 Blue Devils guard Tocorian Brown drives to the hoop in a game against Gulf Shores last season.|Photo by Chandler Myers

Escambia County fell to 1-4 on the season with two losses in the Thanksgiving tournament hosted by the Hillcrest-Evergreen Jaguars in Evergreen last weekend.

The Blue Devils lost 79-69 to J.F. Shields in double overtime to close the tournament on Saturday and were defeated 59-57 by the Jaguars in the opening game on Friday.

Blue Devils head coach Anthony Hayes said his team is still working on improving their free throws as well as working towards bettering their record.

“We missed several free throws in both of our games,” Hayes said. “We shot 48 percent against Hillcrest, which shows we are not capitalizing on our opportunities and against Shields, we missed 17 throughout the game. We are looking to get back on track in all areas of our game, but that needs the most improvement.”

After falling to hosting Hillcrest-Evergreen on the opening day of the Thanksgiving tournament, the Escambia County Blue Devils were defeated 79-69 by the J.F. Shields Panthers dropping them to 1-4.

The Blue Devils hung with the Panthers for the majority of the game before falling behind in the second overtime period.

“In an important double-overtime game, J.F. Shields made the big shots and we didn’t,” Hayes said. “Our guys seemed to be a little tired in the second overtime period.”

In the first half, ECHS and J.F. Shields traded the lead with the Blue Devils leading 13-12 after the first quarter and Shields taking the lead into halftime ahead 26-25.

After halftime, the teams continued to play closely with the Blue Devils winning to force a tie at 38 heading into the fourth quarter

Overtime proved to be the difference with the Blue Devils getting winded in the second overtime and Shields taking advantage to post a 79-69 victory.

C.J. Pierce, Tocorian Brown and DeMarcus McMillian each played at a high level with Pierce scoring 12, Brown with 11 and McMillian with 10 points.

Hayes said things are coming together for his team.

“Things are beginning to piece together for us,” he said. “We re seeing who needs to be on the floor at certain times. It’s on me to make sure our guys are ready and I will continue to work hard to make them prepared.”

The Blue Devils (1-3, 0-0) were narrowly defeated 59-57 by the Jaguars at Hillcrest’s Thanksgiving tournament on Friday.

The Blue Devils fell behind in the first quarter with the Jaguars jumping out to a 17-10 lead, but ECHS fought back to only trail 27-24 at halftime.

Following the break, the Blue Devils took the lead in the third quarter as they scored 18 points and led 42-41 heading into the fourth period.

The Jaguars took advantage of their scoring opportunities and put the game away winning 59-57.

Blue Devil C.J. Pierce led ECHS with 25 points in the loss. He also shot 70 percent at the free throw line.