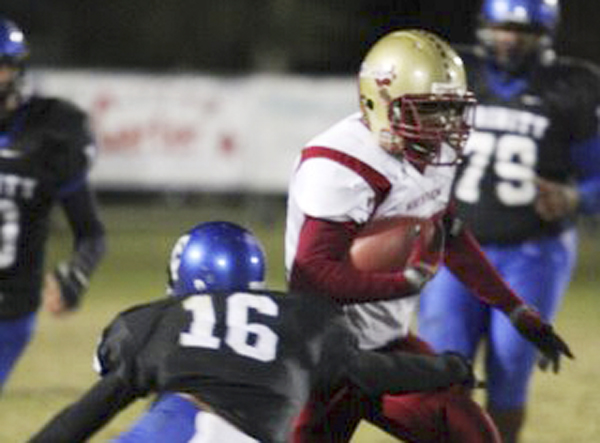 JACKSONVILLE, Fla. – The Northview Chiefs showed no signs of a long road trip as they jumped out to an early lead on Trinity Christian Academy Friday night in the FHSAA Class 1A state semifinals.

The Chiefs’ lead would be short lived, however, as the Crusaders answered back two minutes later to take a 7-6 lead and never looked back as their offense flexed its muscles and their defense capitalized on Northview miscues to runaway with a 49-14 victory.

“They have a great team,” NHS head coach Sid Wheatley, who was unavailable for comment following the game, said Tuesday.“This is the time of the season though where you expect everyone to have a great football team. They have some very good skill people.”

Northview (11-2) scored first in the contest when Dustin Yuhasz scampered into the end zone on a 12-yard run. Place kicker Lance Bushaw’s extra point was blocked, but the Chiefs had taken a 6-0 lead with 5:47 remaining in the opening stanza.

Two minutes later, on the ensuing drive, the Crusaders scored and took the lead with a successful extra point. They would not lose the lead again in the game.

The second quarter only saw one touchdown by way of a 23-yard pass by Trinity Christian midway through the quarter. The home team took a 14-6 lead into the locker room at halftime.

The Crusaders started the second half making quick work of Northview’s defense scoring in 55 seconds on a 15-yard touchdown. Following the extra point, they had extended their lead 15 points, 21-6.

With 5:05 remaining in the third quarter, the Chiefs’ offense sparked as Roderick Wood capped off a drive as he plowed into the end zone from two yards out. Following a successful two-point conversion, Northview had inched to within one touchdown of Trinity.

The Crusaders then went on a scoring onslaught tacking on 28 points in the next five minutes. Scores included a 47-yard touchdown, a 20-yard scoring pass, a touchdown with 1:45 remaining in the quarter and score off a Northview fumble with 20 ticks left in the third quarter.

The fourth quarter was scoreless as Trinity came away the victory 49-14.

Despite the loss, the Chiefs’ semifinals appearance is the farthest the school has ever made it in the playoffs.