It took two overtimes, but at the end of the second overtime period, the Escambia County Blue Devils had earned their second area win defeating the Monroe County Tigers 69-63 at Escambia County High School on Thursday night.

The Blue Devils (7-6, 2-0) had to overcome a first-half deficit, but clawed back in the second half to push the game into the needed extra time.

Blue Devils head coach Anthony Hayes said it was an exciting game to be a part of.

“This was two young teams with young coaches playing a fun basketball game,” he said. “We are really similar in style of play and personnel, so we are proud of the way our players hung tough and earned a home win.”

The first half of the game was a struggle for the Blue Devils as they had trouble getting shots to drop through the basket.

In the first quarter, both teams battled for momentum with the Tigers coming away with the lead 13-11.

Monroe County extended their lead in the second period as ECHS continued to struggle shooting from the field and the Tigers went into halftime leading 27-17.

After the break, the message that Hayes conveyed to his team must have worked because they came out with a different swagger and began cutting away at Monroe County’s lead.

The Blue Devils found their shot in the third quarter as they put together a strong run outscoring Monroe 24-13 and taking the lead entering the fourth quarter 41-40.

The real battle began in the fourth as both teams went basket-for-basket as the Tigers outscored ECHS 15-14 to force overtime with the teams tied at 55.

The second extra period proved to be the difference as the Blue Devils outscored the Tigers 12-6 to pull out the 69-63 win.

Blue Devil C.J. Pierce led ECHS with 24 points in the win as he hit six crucial three-point shots during the game. Pierce also finished with three rebounds, two assists and one steal.

Demarcus McMillian added 14 points for the Blue Devils and recorded six rebounds, two blocks and one steal in the victory.

ECHS’s Nashawn Hartley and Tony McAroy each finished the game with four points. Hartley had one steal and McAroy had one rebound.

The Blue Devils next game is today in the Escambia County tournament at T.R. Miller. Game time is set for 3:30 p.m.

Escambia County lost a heartbreaker to the Robertsdale Golden Bears 45-42 in Robertsdale on Tuesday night.

The Blue Devils (6-6, 1-0) could not hold the lead they held at halftime as the Golden Bears took control in the second half.

“We played an OK game,” he said. “The kids didn’t come out flat after their big win over Bay Minette, but a stagnate second quarter on offense really hurt us. Robertsdale is a good team and they gained the momentum.”

In the first quarter, the Blue Devils continued what they had finished in Bay Minette as they jumped to an early lead winning 15-9 at the end of the period.

The second period proved to be a problem for ECHS as they were outscored 9-5 and only held a slim 20-18 lead at halftime.

Following halftime, the Golden Bears hit a hot streak as they took the lead in the third quarter and didn’t look back.

An 18-point outburst in the third period started Robertsdale’s road to the win as they held ECHS to 11 points to lead 36-31.

The Blue Devils fought back in the final quarter outscoring Robertsdale 11-9, but a missed shot at the buzzer prevented a tie with the Golden Bears winning 45-42.

Dalvin Craft and Fred Knight each scored five points in the loss. Craft recorded four rebounds and one block and Knight had one rebound, one assist, one steal and a block. 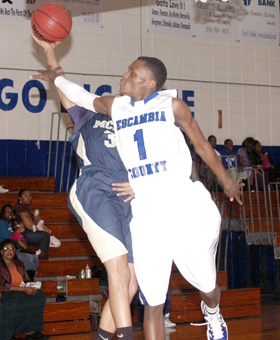 Darron McGhee and Tanner Kirk led the way for the Escambia Academy Cougars as they beat the Atmore Christian School... read more