The word “monster” could be used to describe a lot of things when talking about Escambia County Blue Devils junior defensive tackle Tyler Nero.

Another way to use the word monster with Nero would be when speaking about how he blows up offensive lines in his effort to make a big stop.

No matter how you look at it, Nero played like a monster or a man possessed for the entire 2010 season and his performance has earned him the 2010 Atmore Advance Defensive Player of the Year award.

Nero made the most of his junior year as he dominated opposing offensive lines game after game to help lead his team to the AHSAA quarterfinals.

No matter whether it was a double-team or a triple-team, he worked his way through and around blockers to make his presence known.

Nero said winning the honor means a lot because he has never won an award like it before.

“It means a lot to me,” he said. “I’ve never been the Defensive Player of the Year before, so it just means a whole lot.”

To play as well as he did for 13 games shows the consistency and persistence that Nero has when he is on the football field.

Nero said he did what he could before the season as well as during the season to make sure he could give his team a better chance. He said he thinks his efforts are what helped him earn the postseason honor.

“I put in hard work during the offseason,” Nero said. “We really didn’t have much of an offseason last spring, but I still lifted weights to try and get stronger. During the season, I just went hard every play in every game. And without the big man in the sky none of this would have happened.”

For Nero, he did not play harder during the middle or end of the season than he did at the beginning.

The defensive tackle said he gave his all from the first game against the Blue Devils rivals, the T.R. Miller Tigers, which ECHS won 35-34 in overtime.

“I played my hardest in the Miller game and continued to from that point on,” Nero said. “I did my best to help my team and always played to the best of my abilities.”

Giving his all on the field one was just one thing Nero did to make sure he was on top of his game.

He said during the season he never missed a practice or workout session.

“I was always on time to practice and weightlifting,” Nero said. “I never missed a workout and made sure to do every rep that was assigned to me during the season.”

Nero’s head coach, Mark Heaton, agrees that his player is a righteous recipient of the honor.

“He is very deserving,” Heaton said. “I think Tyler is a guy that no matter what caliber team we play will be dominant. There is no one person on any team we play that could stop him.”

As for his favorite moment during the season, Nero sees the breakthrough win against the Jackson Aggies at the top of his list.

He said the comeback made by the Blue Devils is something he will always remember.

“The Jackson game was my favorite during the season,” Nero said. “It was a huge game for us and we came back from 21-points down to win. That was a great win that helped us get to the quarterfinals of the playoffs.”

With 2010 behind him and his senior season nearing, Nero is getting ready for what could be an important year.

Nero said he is excited to see what is in store for him with his football team as well as the future.

“I’m looking forward to getting offers to play college,” he said. “I want to get better and stronger, so I can play at the next level. I’m also excited to help my team have another good year and see how far we can make it in the playoffs.” 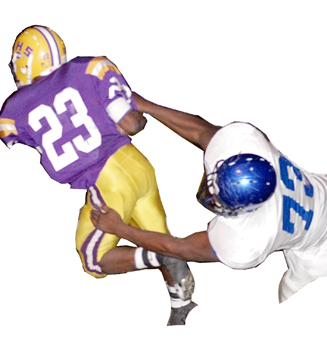 Tyler Nero is the Atmore Advance's 2010 Defensive Player of the Year.|File Photo

Congratulations are in store for two of Atmore’s area teams as the Escambia County Blue Devils and Escambia Academy Cougars... read more