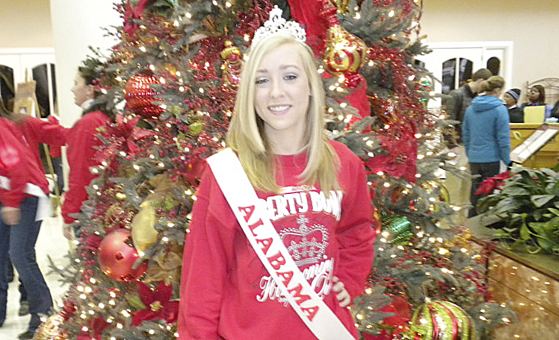 Escambia Academy homecoming queen Kristen Matthews visited Memphis over the weekend for the Liberty Bowl and to visit St. Jude Children’s Hospital as a part of the America’s Homecoming Queen program.|Submitted Photo

During the New Year’s holiday over the weekend, Escambia Academy homecoming queen Kristen Matthews received a great opportunity as she traveled to Memphis as a part of the America’s Homecoming Queen program.

Matthews along with other homecoming queens from around the United States made the trip to Memphis for an educating experience.

According to the America’s Homecoming Queen Web site, the purpose of the organization is to promote education and community service for high school homecoming queens in all 50 states.

For Matthews, the experience at St. Jude, which is one of the world’s premiere centers for research and treatment of catastrophic diseases in children, primarily pediatric cancers, was emotional because of what she saw.

“One of things we did was a tour of the facilities at St. Jude,” she said. “ We got to see how they help the children. It’s really doesn’t seem like a hospital because they try to make it fun for the people there. It was emotional because when you walk through the halls you would see the kids and they would see us and be in awe, but some were shy because they didn’t want us to see them like that. They were kind of shy.”

During the visit to St. Jude, Matthews and the other homecoming queens also got to visit with one of the patients and family members.

Aside from the visit to the hospital, Matthews was a part of the Liberty Bowl parade and saw the Georgia Bulldogs and Central Florida Knights play in the AutoZone St Jude Liberty Bowl Classic.

Matthews said the trip was fun, but she had a hard time choosing between the two teams.

“I love the trip,” she said. “I’m glad I went because I had never been to Memphis or seen St. Jude. I knew what it was about though. The game was a lot of fun, but I had a hard time deciding who to pull for because I sometimes root for Georgia, but Central Florida has Josh Linam from Atmore on the team.”