With a successful run to the quarterfinals in their rearview mirrors, the Escambia County Blue Devils were honored by their coaches on Thursday night at Escambia County High School in the end of the year football banquet.

The event featured dinner provided by the Alabama Wing House and David’s Catfish House and the Blue Devils being honored with plaques for their accomplishments.

After the dinner portion of the banquet was complete, the Blue Devils coaches, players and guests assembled in the school’s auditorium for the awards.

Blue Devils head coach Mark Heaton started by awarding all of his players with plaques commerating their run through the playoffs.

Heaton said recognizing his players is important because of the hard work they put in all year.

‘“Everything about the banquet went great,” he said. “It’s good to get all of these guys together one last time to recognize them for their accomplishments. Football is a long strenuous season and it’s more than just the fall months. They start in January with offseason strength and conditioning and roll into spring training, summer workouts and then the season. This banquet is a good thing because it gives the guys the recognition for the work they put in and also gives them something to strive for.”

The awards given out at the banquet ranged from individual honors based on stats to awards voted on by members of the team.

Heaton said the stats awards are good for recognizing certain individuals, but added the awards voted on by the team are more important.

“Several of the honors given out are based on stats, but then there are coaches awards and most importantly the awards voted on by the players, which are team captains and the Assistant Coach of the Year.”

For the 2010 season, the Blue Devils found two players worthy of being named permanent team captains with senior Marshall Rolin and sophomore Domineque Hubert showing the qualities that earned those honors.

In the other team voted award, defensive coordinator Andy Lambert was named Assistant Coach of the Year.

Statistically, four players were honored for their performances during the season.

Senior center Dylan Broadbent received the Offensive Lineman of the Year for being the lineman with the highest grade during the season.

Blue Devils quarterback Rico Stallworth was not in attendance, but was awarded the Offensive MVP award.

Heaton said despite Stallworth’s recent troubles, he still deserved the honor of MVP.

“Regardless of the circumstances at hand, that’s an honor that Rico earned during the football season,” he said. “He did a great job for us and is well-deserving of that award. You can’t take back anything he did during the season, so he deserves the recognition.” 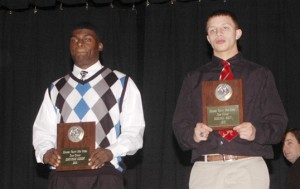 On the defensive side of the ball Tyler Nero was awarded the Defensive MVP award, while Tocorian Brown won the “Hawk Award” for having the most interception. The entire defensive line received the “Trench Award” for their performances.

Rolin was also honored as the Special Teams Player of the Year.

Heaton said he is proud of his team and will remember them for the work they put into making the 2010 season successful.

“Their desire to change and move the program forward is something I will always remember about this group,” he said. “Having a solid group of guys work towards the same goal. Our success was a bi-product of the standard that those kids tried to adhere to.”

Escambia Academy’s Lady Cougars fell to 5-4 on the season with a 43-38 loss to the Wilcox Academy Lady Wildcats... read more