The Escambia County Blue Devils had to climb out of a hole against the B.C. Rain Red Raiders last Friday to earn their second area win of the season.

The Blue Devils (11-6, 2-0) fell behind in the first half, but were able to gain momentum after halftime to outlast the Red Raiders.

In the first quarter, the Blue Devils struggled to hit their shots as B.C. Rain outscored them 13-7.

B.C. Rain held control of the game in the second quarter as they again outscored ECHS this time 18-12 to take the lead into halftime ahead 31-19.

Following halftime, the Blue Devils turned their fortunes around and began playing how they did in the county tournament to close out 2010.

The third quarter was dominant for the Blue Devils as they hammered away at the Red Raiders’ lead outscoring them 24-15 to pull within three points.

Down 46-43 with the beginning of the fourth quarter, the Blue Devils kept the ball rolling as they outscored the Red Raiders 16-10 to come away with the 59-56 victory.

“We only shot 53 percent from the free-throw line, so we are pleased to have gone on the road in a tough environment and come away with an area win,” he said. “Coach (Jerome) Webster, our junior varsity coach, led the guys into competion and did a wonderful job. He knows our system and is experienced in game situations. We are proud of the job they did at B.C. Rain. “

Blue Devils center Andrew Rodgers picked up where he left in 2010 when he won the county tournament MVP by posting a double-double with 15 points and 10 rebounds in the win.

Fred Knight posted 10 points for ECHS and snagged three steals and one rebound.

The Blue Devils next game is Friday at home against Saraland. Tipoff is at 7:30 p.m. 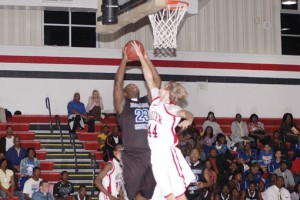 Blue Devil Dalvin Craft goes for a layup against the T.R. Miller Tigers in the Escambia County tournament last month.|Photo by Chandler Myers