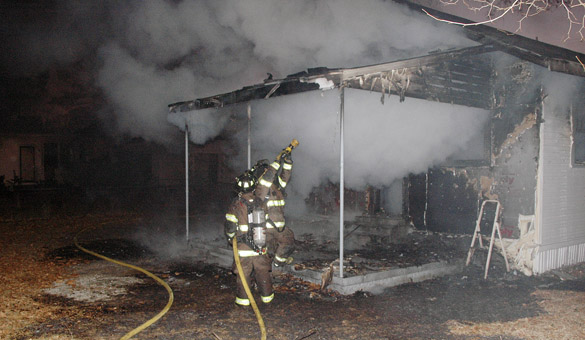 “The house was locked up,” he said. “The owner said she walked in and turned up the thermostat and walked out earlier that afternoon. It later caught fire.”

A majority of the fire was contained to the back half of the office, which is operated out of former residential home. Firefighters worked for more than an hour to control the flames, which made its way into the attic, and to douse all of the hot spots. The fire also spread outside the structure onto the back porch and caught part of the yard on fire.

Dispatchers with the Atmore Police Department received the 911 call at 5:16 p.m. and units with the fire department were on the scene three minutes later. A total 11 firefighters from Atmore responded to the scene with three firemen with the Poarch Fire Department offering mutual aid. Five rescue units including two engines from the AFD were used and one engine from Poarch.

The exact cause of the fire is under investigation.

No injuries were reported.

A prayer breakfast will be held in honor the late Dr. Martin Luther King Jr. this weekend.|File Photo The Concerned... read more