Escambia County received a full team effort last Friday night as they remained undefeated in area play after they crushed the Saraland Spartans 51-20 in Atmore.

The Blue Devils (13-6, 3-0) received scoring from 10 players in the rout, which they controlled from start to finish and never allowed the Spartans to score double-digits in any quarter.

“We were able to come out with a lot of intensity and take control of the game early,” he said. “By doing so, we had the chance to get everyone in the game and work on different game situations. Anytime you can pick up an area win like this, it’s a positive.”

The Blue Devils’ defense was able to keep the Spartans off the scoreboard for the most part, while the offense dismantled Saraland by outscoring them 14-2 in the first quarter.

Atmore continued its dominating run in the second quarter as they only allowed the Spartans to score four points to roll into halftime with an easy 30-6 lead.

After the break, the Blue Devils continued to pound Saraland with their lead never in jeopardy.

Seventeen points in the third quarter helped ECHS extend their lead to 35 points as they outscored the Spartans 17-6.

Leading 47-12 at the start of the final quarter and with their starters getting some rest, ECHS was outscored 8-4 by the Spartans, but still picked up another area win 51-20.

Hayes said his opponents played hard and added his team is starting to play great basketball.

“Saraland is well-coached and fought the entire game,” he said. “Our guys have been working hard and playing well and we plan to continue to push them down the stretch. It was really good to have 10 of our 12 players scoring tonight.”

Fred Knight led ECHS scorers with 10 points in the win. He also had one steal. 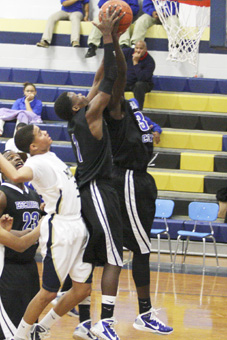