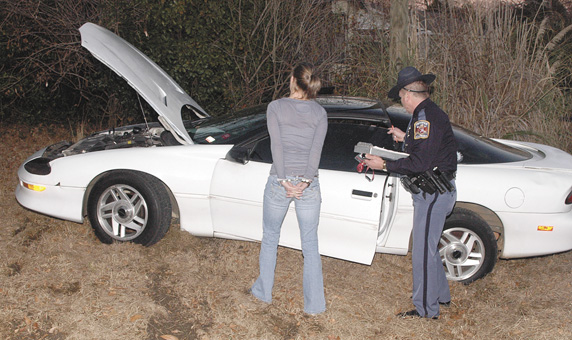 Jessica Stillwell is questioned by an Alabama State Trooper Wednesday afternoon following a high-speed chase that ended when she crashed in Atmore.|Photo by Adam Prestridge

Alabama State Troopers released the name of the Baldwin County woman who led one of its officers on a high-speed chase through parts of Baldwin County and ended when she crashed her sports car in Atmore Wednesday afternoon.

According to Public Information Officer Trooper Greg Eubanks, Jessica S. Gambrell Stillwell was the driver of a white 1995 Chevrolet Camaro that one of the office’s troopers pulled over in Baldwin County for an apparent traffic violation. As the trooper approached the vehicle, Stillwell sped off leading the trooper on a high-speed chase on Interstate 65.

Officers with the Atmore and Poarch police departments were called for assistance as the trooper approached Escambia County. Stillwell continued to elude the officer as she exited Interstate 65 at Exit 54 and continued on Jack Springs Road. As she neared Atmore city limits, officers with the APD joined in the chase, which ended when she attempted to turn onto Maple Drive at a high rate of speed and crashed into a ditch.

Officers quickly detained Stillwell and later learned that she had outstanding felony warrants for theft out of Baldwin County.

The 29-year-old Robertsdale resident remains behind bars in the Baldwin County Corrections Center without bond, according to Baldwin County Sheriff’s Office officials. She was charged with negotiating a worthless instrument; receiving stolen property, third degree and attempt to elude.

Nancy Peters stands in front of some of the items that are badly needed in Haiti. Some of the mattresses... read more