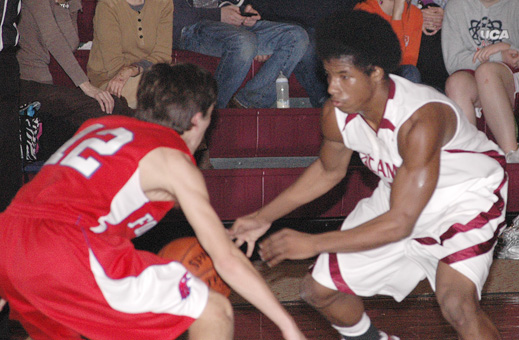 Escambia Academy’s first loss of the season could not have come at a worse time as the No. 4 Cougars were defeated in the first round of the region tournament on Thursday night at Clarke Prep in Grove Hill.

The top seeded Cougars (18-1, 6-0) were knocked out of contention for the region by the fourth seeded Patrician Academy Saints 59-47.

The loss also eliminates EA from participating in the state tournament at Huntingdon College in Montgomery later this month.

The Cougars’ chances were spoiled by a slow start in the first half, while the Sains built an early lead that EA could never overcome.

In the first quarter, the Cougars were unable to convert their scoring opportunities allowing the Saints to jump out to a lead as they outscored the Cougars 18-9.

Patrician continued to control the tempo of thegame in the second period as they outscored the Cougars again. For those eight minutes, the Saints were able to enjoy a 15-7 run against EA, which helped them extend their lead before the midway point.

At halftime, the Saints were on top of the Cougars 31-16.

Following halftime, the Cougars were able to pull within nine points of the Saints, but it would be the closest they could get before suffering their first defeat.

The Cougars showed glimpses of the greatness they had all season in the third quarter as they were able to cut into the Saints’ 15-point lead. Escambia outscored Patrician 18-12 in the period to go into the final quarter down 43-34.

The comeback attempt was short lived though as the Saints put together one last run outscoring the Cougars 16-13 to come away with the win 59-47.

The Cougars were led by forward Keaton Maher who posted another double-double recording 13 points and 10 rebounds. He also had two steals and a block in the loss.

Cougar Jordan Sasser scored six points to go along with two rebounds and a steal.

Jaylen Henry rounded out the scoring for EA with two points, four assists, two rebounds and a steal.