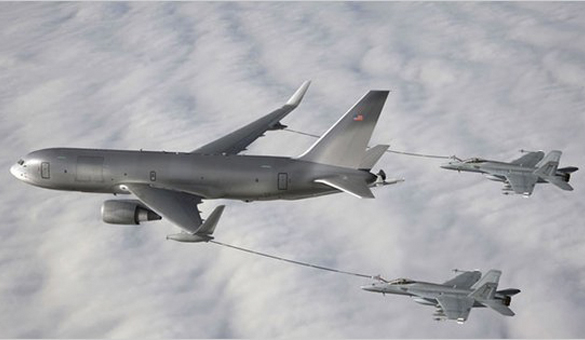 An artist rendering of the tanker.|Boeing via Reuters

Boeing was announced as the “clear winner” as it was awarded the U.S. Air Force’s $3.5 billion contract to build aerial fueling tankers during a press conference in Washington, D.C. Thursday afternoon.

The contract could ultimately be worth $35 billion, officials said.

In what officials described as a “fair, open and transparent process” Boeing beat out its rival the European Aeronautic Defense and Space Company (EADS) for the contract after it was awarded the Mobile-based company and Northrop Grumman in 2008, only to have government auditors block the award after Boeing protested that the evaluation had been too subjective.

The announcement did not settle well with U.S. Rep. Jo Bonner (R-Mobile).

“After having already won the competition three years ago and having brought to the table the best refueling aircraft for our military, it’s deeply disappointing that Mobile and the Gulf Coast were not chosen as the home of the new Air Force tanker,” he said. “Unfortunately, the best tanker for our military was not selected. I intend to demand a full accounting as to why.”

According to U.S. Congress officials, EADS has right to a protest the decision. Bonner said he is unsure if EADS will protest.

“While there was great optimism that our team would ultimately prevail, we’ve also been conditioned to expect the unexpected,” he said. “ This competition has been challenged before and it’s not unlikely it will be challenged again. It will ultimately be up to EADS to determine whether they will protest this decision and I will fully support whatever decision they make.”

“I am deeply disappointed that the EADS team was not selected to build the next air refueling tanker for the Air Force,” he said. “Three years ago, EADS won this competition because their aircraft had objectively superior capabilities and offered dramatic savings for the taxpayer. In light of today’s result, I intend to examine the process carefully to ensure it was fairly conducted.

“Regardless of today’s unfortunate outcome, the EADS team’s decision to manufacture the aircraft in Mobile was a clear affirmation by a world-class corporation of our state’s remarkable workforce,” Sessions added. “EADS would not have chosen Alabama if they did not firmly believe that our state was a great place to do business in the global economy. I look forward to assisting them in expanding their presence in Alabama.”

In the press conference, it was announced that both Boeing and EADS met all requirements for the contract, but that the price difference was greater than one percent, which was described as a “significant savings to the tax payers.” Throughout the process EADS had been considered to offer the “best bang for the buck.”

The aircraft Boeing will construct is the KC46A and is required to have the first 18 aircrafts of the 179 aircraft deal completed by 2017.

A successful EADS contract would have created thousands of jobs for the Gulf Coast.