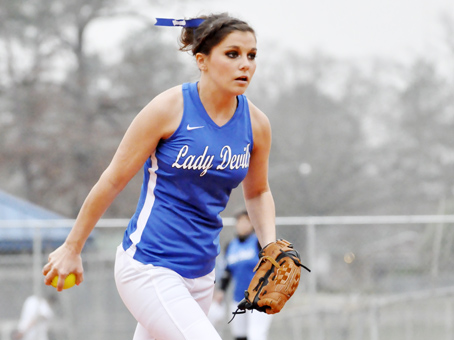 ECHS Lady Blue Devils pitcher Morgan Nichols comes out of her wind up during the Lady Blue Devils’ loss to the W.S. Neal Lady Eagles last Thursday.|Photo by Adam Robinson

The W.S. Neal Lady Eagle softball team got off to a fast explosive start Thursday at home in their 2011 season opener as they cruised to a 15-0 run-rule win over the Escambia County Lady Devils in four innings.

The Lady Tigers scored four runs in the first inning, two in the third, and nine in the fourth to end the game with a win.

“We needed a victory to start the season and it was really important to us to get off to a good start,” W.S. Neal Lady Eagle head softball coach Jeff Haney said. “We played defense well. I think we went error-free and to do that, it was a good game and that gives us a chance to win. We got some timely hits when we needed them with runners on base. We have a lot of stuff to work on. We are still a young team. We only have three seniors so we still have some young kids that are still learning how to play the game. But they are working real hard. They have spent the last few weeks practicing and working their tails off. It has really paid off for them. Atmore is a good team and they played hard the whole game. We saw four different pitchers and timed four different pitchers pretty well, I thought. I am pleased.”

Kaitlin Hadaway earned the win on the mound for the Lady Eagles as she went the complete game and allowed no runs, one hit, walked three and struck out eight.

“Kaitlin did a great job,” Haney said. “She is the key to the whole thing. She is the cog that makes the machine run. She struggled a little bit and got ahead of some batters and then let them go. She walked three in an inning. She walked the bases loaded but we got out of it with a big defensive play. She had a couple strikeouts and we got out of the inning with no runs scored. That has not happened here in a long time, but it is going to happen here this year. Our defensive stepped up, our offense stepped up, and our pitching was great. I can’t be happier as a coach. That is what we look for.”

Haney said on a side note playing Atmore was kind of special because of late Atmore coach (William) Casaday. Casaday was killed in a car wreck last year.

“I am sure he was watching from above today,” Haney said with teary eyes. “I talked to him this morning and I hope he is not mad at me, but I told him we were going to get him today.”

The two coached together at Atmore a few seasons with Haney taking Casaday “under his wing his first year.”

W.S. Neal was set to play at Jay Friday and will return to action next Friday and Saturday in the T.R. Miller Invitational in Brewton.

Recognition has rained down on the area in the last week with one area team and two area athletes receiving... read more