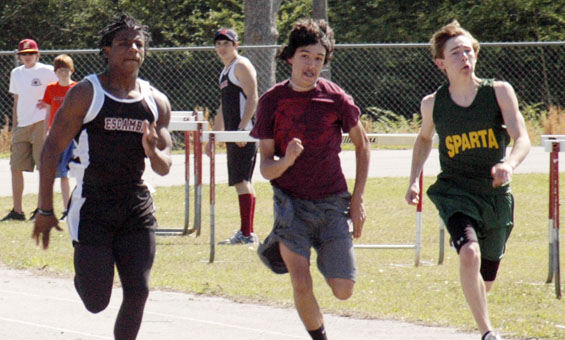 Escambia Academy Cougar Jaylen Henry runs away from his competition in the 100m run during the Cougars’ opening track meet in Canoe on Thursday afternoon.|Photo by Chandler Myers

The Escambia Academy Cougars and Lady Cougars track teams opened its 2011 season with a bang on Thursday as they crushed their opponents in a track meet in Canoe.

The Cougars won boys meet with a 107 points beating out second-place Sparta Academy who scored 44 points and Meadowview Christian School who recorded 40 at the meet.

The Lady Cougars also won their meet easily scoring 87 points and holding off Sparta who scored 59, Meadowview which scored 15 and Fort Dale who recorded no points with one runner at the event.

In the field events, the Cougars fielded a strong team.

Jaylen Henry picked up where he left off after last season winning the long jump with Zack Demko coming in second and Brett Helton coming in third place.

In the high jump, Hadley won his second event with Austin McGhee finishing in third.

In the shot put, Huskey finished second with Grayson Emmons coming in fourth.

In track events, Braxton Chastang bounced back from an injury that most thought would keep him sidelined and won the 100m hurdles.

In the 100m, Jaylen Henry came away in first place with Zack Demko coming in fourth.

In the 100m, Reagan Bell came in third with Josey Franco finishing in fourth.

Melissa Wilson finished first in the 1600m, while Page Lancaster took third in the 200m and Madison Matthews finished fourth in the 800m.