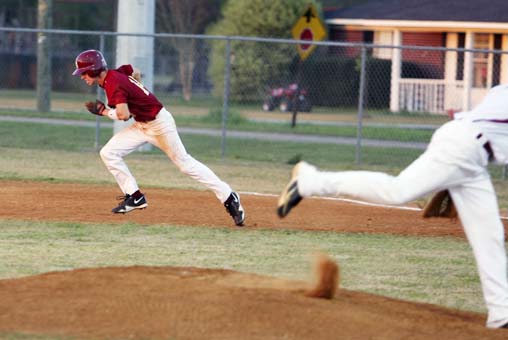 Escambia Academy Cougar Jarrett Hadley attempts to steal second base in the Cougars’ win over the Northview Chiefs last Thursday in Canoe.|Photo by A.J. Beachy

Escambia Academy improved to 6-4 on the season by winning their last two games with a 15-2 victory over the Central Jaguars in Allendale, Fla. on Monday and a 14-4 win against South Choctaw Academy on Friday.

Those wins give the Cougars a four-game win streak with the win over South Choctaw making them 2-1 in region play.

The Cougars next game is Thursday in Bratt, Fla. at Northview High School. Games begin at 4 p.m. with the junior varsity taking the field.

For the third time this season, the Escambia Academy Cougars destroyed the Central Jaguars this time by the score of 15-2.

The Cougars (6-4, 2-1) never trailed in the contest as they scored all of their runs in the first four innings.

In the top of the first, the Cougars jumped on the board 2-0 with Jarrett Hadley and Chason Roley scoring runs.

The Jaguars answered in the bottom of the inning cutting the deficit to one as Abel came across the plate for them.

The Cougars took control of the game in the second inning as they added five runs to the scoreboard with Jacob Fields, Clayton Dyess, Hadley, Roley and Hunter Bates each making it around the basepath.

After holding the Jaguars scoreless and leading 7-0, the Cougars again put a dent on the scoreboard with Dyess, Hadley and Roley each scoring runs for the Cougars to put them up 10-0.

The Jaguars were able to get one more run across the plate in the bottom of the third to cut the Cougars’ lead to eight runs as Water scored.

Escambia Academy scored their final four runs in the top of the fourth with Ryan Linam, Brian Ross, Fields and Dyess touching home plate to give the Cougars a 15-2 lead.

The Jaguars were unable to get any more runs on the board in the fourth or fifth innings giving the Cougars their fourth consecutive win.

In a region battle, the Escambia Academy Cougars were able to come away with a 14-4 win over the South Choctaw Academy Rebels last Friday in Canoe.

The Cougars (5-4, 2-1) picked up their second region win of the season behind the arm of pitcher Reid Bell and the offense provided by several Cougars.

The Rebels opened the game with a run as their leadoff batter Corbin Johnson ripped a single and eventually made it across home plate.

The Cougars answered in the bottom of the inning with a run of their own as Jarrett Hadley hit a single and knocked in by Bell.

In the bottom of the second, the Cougars built a lead as Ryan Linam, Hunter Bates, Clayton Dyess, Jacob Fields, Brian Ross, Hadley and Bell all scored giving EA a 7-1 lead.

The Rebels cut that lead to five runs when Johnson scored again in the top of the third, but the Cougars answered with Bates scoring his second run of the game.

Escambia Academy extended their lead again in the bottom of the fourth as Chason Roley, Bell and Linam all scored putting E A on top 11-2.

After a scoreless fifth inning, the Rebels put two more runs on the scoreboard with Joel Bucane and Colten Mizingo both scoring runs, but the game would be called after the bottom of the inning as EA took a 10-run lead with Zack Demko, Bates and Blake Clark scoring the final three runs of the game.