A weekend argument between two preschoolers escalated Monday into a confrontation between adults — and a shooting that left one man injured, Atmore Police officials said.

Anthony McCants, 27, was listed in stable condition Tuesday after begin shot in the back in the parking lot of a Bragg Street apartment complex Monday morning, APD officials said.

Francis Tyrone Blount, 32, was arrested by APD officers and was charged first-degree assault in connection with the incident.

According to reports from Atmore Police, the incident took place around 7:30 a.m. Monday in a parking lot at the apartment complex when several people gathered in the area.

Witnesses told officers responding to the call that the mothers of the pre-schoolers got into a physical altercation as they walked their children to the school bus stop Monday morning.

Following the altercation between the two women, a large crowd armed with baseball bats gathered in one of the parking lots and a fight began, officials said.

During the fight, witnesses said, Blount reportedly pulled a handgun and shot McCants, according to police.

McCants was transported to Atmore Community Hospital by a family member following the shooting. He was later transported by Lifeflight to an out-of-town hospital where he remained in stable condition, according to Atmore Police. 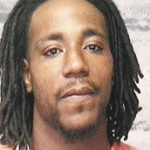 The Alabama Department of Public Health is warning food establishments to be on the alert for an inspection scam. Several... read more