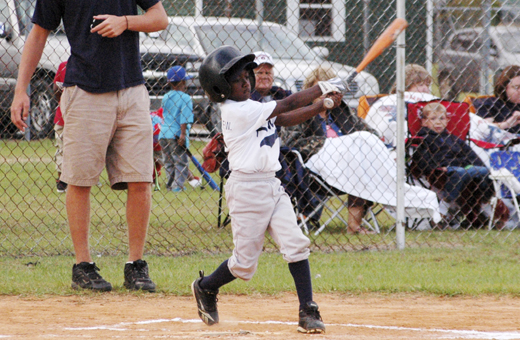 An Atmore VFW Ranger swings at a pitch during the Rangers game against the White Sox.|Photo by Chandler Myers

The Atmore VFW Rangers started the week off with a win over the PCI Cubs winning 9-5 on Monday night at Tom Byrne Park in Atmore Cal Ripken American League action.

Neither team scored in the second inning, but the Rangers took the lead 7-2 in the top of the third with Chaston Helton (2-for-3, 2R), Sam Smith, Ray and Wilson all crossing home plate.

The Cubs added two more runs in the bottom of the inning as McGhee and Davis each scored on Davis’ second home run of the game.

The Rangers added their final two run of the game in the top of the fourth as Trey Bradley (1-for-1, HR, R) and Helton each touched home plate to give their team a 9-4 lead.

In the bottom of the fifth, the Cubs could only score one run with Caleb Davis (1-for-3, R) crossing the plate, but the Cubs would fall 9-5 to the Rangers.

After the White Sox stranded a runner on base in the top of the first, the PCI Angels jumped out to a 2-0 lead as Preston Respress (3-for-3, 2R) and Chase Bell (2-for-3, 2R) each crossed home plate.

The White Sox failed to score in the second and third innings, but the Angels extended their lead in the bottom of the third with Deidrich Alemezoho (1-for-2, R), Respress, Bell and Kameron Bowen (1-for-3, R) all making it around the bases to put the Angels up 6-0.

In the top of the fifth inning, the White Sox finally got on the scoreboard with Bubba McGhee (1-for-3, R) cutting the Angels’ lead to five runs.

The Angels added their final run in the bottom of the fifth with Chasen Wynn (1-for-3, R) getting around the bases to score putting his team up 7-1.