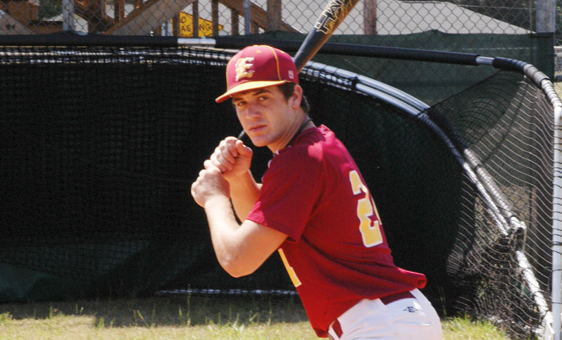 Escambia Academy sophomore Reid Bell has been selected as The Atmore Advance’s 2011 Diamond Kings Player of the Year. Bell finished the season with a .422 batting average, three home runs and a 2.30 earned run average.|Photo by Chandler Myers

Baseball is a sport that takes dedication and patience for a high school player. Dedication because it requires consistent hard work to keep yourself primed for the 30 or more games that they might play depending on the playoffs. Patience is needed for the tough times that a player goes through with slumps and rough games.

Escambia Academy sophomore Reid Bell has used both of those characteristics to cultivate his skills to become one of the talented baseball players in the Atmore area.

Bell’s hard work has paid off to help him become The Atmore Advance’s 2011 Diamond Kings Player of the Year.

Being named Player of the Year was a surprise to the first-year starter for EA. He said he just played a game he enjoys.

“It’s pretty big,” Bell said. “I wasn’t expecting anything like this. I just went out and played baseball this season and had fun.”

Bell did it all during his first season with the Cougars playing shortstop, pitching and being a strong batter.

During the season, Bell helped the Cougars to several wins and finished on the mound with a 2.30 earned run average. At the plate, he was also a dominating force hitting .422 with three home runs.

Bell said he gave his all in every game for his team.

“I didn’t really try to do anything special,” he said. “I just played to the best of my abilities to help my team.”

Playing to the best of his abilities came from the work that he put in at each practice.

Practice was an area that Bell took seriously, and he said he never missed one.

“I practiced every chance I got,” he said. “I never missed a practice and put in as much work as possible.”

For Bell, this season will be one he remembers with the chance to compete with his teammates. He added that he almost pitched a no-hitter.

“Playing with my friends,” he said. “The Clarke Prep game was probably my best game. I pitched well in that game. I threw a one-hitter, which could have been a no-hitter, but one got by us.”

With two seasons left, Bell has plenty of time to improve his game and play for more chances to be Player of the Year.

He said that he is going to continue to work on his game with certain areas needing more improvement then others.

“I’m just going to work as hard as I can to be the best I can be,” Bell said. “My hitting could still use some improvement, but that’s an area that where improvement is always needed.”

Public swimming will begin on Tuesday, May 31 when the Tom Byrne Park pool opens. The first session of swimming... read more