Lymon named Teacher of the Year by VFW 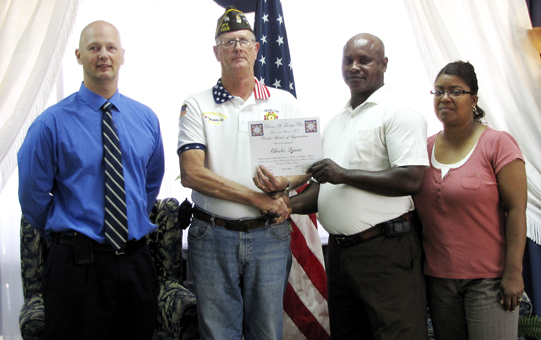 Charles E. Lymon, second from right, accepts his certificate of honor for being named the Veterans of Foreign Wars Teacher of the Year at Escambia County High School. Lymon received his certificate presented by Billy Gates, commander of the local VFW post. Joining the honoree for the presentation were ECHS Assistant Principal and Coach Forrest Jones, left, and a guest.|Photo by Lydia Grimes

It was only fitting that Charles E. Lymon would be selected to be the Veterans of Foreign Wars Teacher of the Year at Escambia County High School, as he is a veteran of more than 20 years in the U.S. Marine Corps.

Lymon is a graduate of Escambia County High School and served in the U.S. Marine Corps as a mechanic, recruiter and instructor on several bases across the country and abroad, receiving numerous awards and commendations from both the military and private sectors. Since retiring in 1999, he continued his education at Jefferson Davis Community College and the University of South Alabama. He has been with the faculty and staff of Escambia County High School as the on-campus-suspension manager for more than eight years.

“He was a perfect choice for this award,” said Forest Jones, who is the assistant principal and coach at the school. “He presents a good example for the students. He has influence on students and young people in Atmore and he is most deserving of this honor. His name was the first one that came to mind to receive this award.”

Billy Gates, commander of the VFW Post, presented Lymon with a plaque and congratulated him on being chosen. He said he couldn’t be more pleased to see the award go to Lymon. He said that each year three exceptional teachers are recognized by the VFW for their outstanding commitment to teach Americanism and patriotism to their students. The VFW annually recognizes the nation’s top classroom elementary, junior high and high school teachers who teach citizenship education topics ñ at least half of the school day in a classroom environment ñ and promote America’s history, traditions and institutions effectively.

Jones said that Lymon has become known for his positive interaction as mentor and counselor with both the students and teachers at Southeast Lutheran High School in Los Angeles, Calf.; Forest Brook, Scarborough, Waltrip, and Smiley High Schools in Houston, Texas; Kadena and Kinser Schools in Okinawa, Japan; and at Marine Corps Service Support School at Camp Johnson, N.C., where he completed his Marine Corps career as instructor of marine mechanics, and at Escambia County High School in Atmore.

“We are proud to spotlight our OCS manager, Charles E. Lymon,” he said.

With a renewed focus on service, Atmore’s Chevrolet dealership is under new ownership and a new name. Carl Smith, who... read more