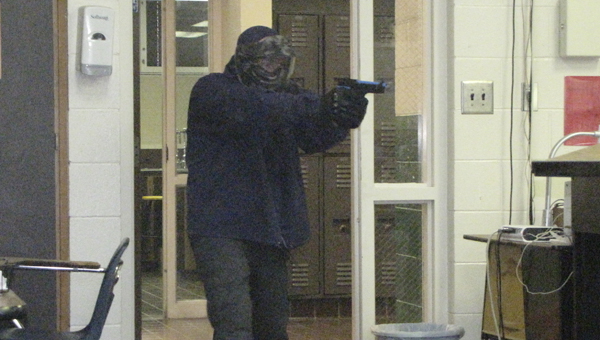 An armed gunman stormed the halls of Flomaton High School Wednesday afternoon and even held a hostage in a classroom.

Fortunately, it was all part of an active shooter training course for local law enforcement. Members of the Escambia County Sheriff’s Office, Atmore Police Department, Flomaton Police Department and Alabama Marine Police took part in the training from the National Center for Biomedical Research and Training at Louisiana State University.

“This gives us first-hand knowledge to train in a school and see what it would be like,” said ECSO Chief Deputy Mike Lambert. “The realistic training allows you to have the mindset to be more aggressive and neutralize a threat.”

The third day was devoted to an active shooter scenario. In the scenario Wednesday a gunman held a hostage in a classroom in the school until officers, armed with guns loaded with live 9mm training rounds, neutralized the threat and reacted to recorded screams coming from another classroom.

“In the past with active shooters we’ve learned that they’re not hiding around the corner waiting to ambush officers,” Lambert said. “They’re walking around and taking their time.”

A lot of times officers are unaware of the situations they might walk into when dealing with an active shooter, which is why the training is so crucial, Lambert said.

“With this we’re engaging the bad guy however they’re playing the role,” he said.

“It helps you understand better when officers are going through a scene,” Fuqua said. “It helps you assist them.”

Hammond said he was very honored that his school could host the program funded by Homeland Security and knowing that local law enforcement would benefit from training like that demonstrated Wednesday gave him peace of mind.

“It gives you a good plan to know what’s going to happen,” Hammond said of the training.

Lambert said the officers involved in the training will be certified to train others at their respective offices after this round of training.