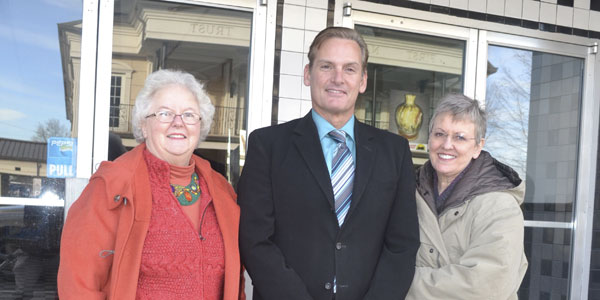 Pride of Atmore board members Nancy Karrick, Bub Gideons and Nancy Helton are among a group of citizens who hope to raise enough money to purchase the Strand theater for historic preservation. Also on the board of directors are Sheryl Vickery, Christopher Rowland and Leigh Ann Rowland.

A group of concerned Atmore citizens is working to make sure the curtain doesn’t completely go down on one of the state’s oldest movie theaters.

The non-profit “Pride of Atmore” civic group was formed in December 2013 and is currently seeking its status as a 501(c)(3) organization. While the overall focus of the group is to increase civic pride in and around the Atmore area, the group’s immediate goal is to raise funds to acquire the recently closed Strand theater.

The Strand, a downtown landmark, closed its doors in early November 2013, after nearly 84 years in business. Sheryl Vickery, executive director of the Atmore Area Chamber of Commerce, said the Strand had been the longest continually operating movie theater in the state of Alabama.

Nancy Helton, a member of Pride of Atmore’s board of directors, said it is important to preserve a part of the city’s history.

“We need to save the history of what the Strand brought to Atmore,” she said. “It’s a big part of downtown and we want to have pride in our city’s history.”

Pride of Atmore’s executive director is Bub Gideons and Helton is joined on the board by fellow directors Vickery, Nancy Karrick, Christopher Rowland and Leigh Ann Rowland.

While the group is still in its early stages of organization, they have already taken proactive steps toward acquiring the Strand. Founding board members have reached out to several local preservation groups in the area, including those who played a part in preserving old theaters in Mobile and similar cities. The group is also seeking grant funding and similar financial assistance, and is planning local fundraisers in the coming months.

In addition, the group has established a Facebook page (Search for “Save the Strand”) and welcomes any public input. Anyone who wishes to help with the goal of acquiring and preserving the theater can email prideofatmore@yahoo.com or call Gideons at (251) 359-6523.

Gideons said some of the possible uses for the Strand could be holding special events, showing “old” movies, housing a museum, or possibly serving as the chamber office. However, he noted that it is way too early in the process to set an actual future use for the facility, if the group is able to purchase it.

Karrick said she has seen other pieces of Atmore fade away, such as the old Rachel Patterson Elementary School, because there was nobody who fought to save them. She expressed her appreciation to the Atmore Lions Club for helping to preserve the old Escambia County High School as the YMCA, and hopes Pride of Atmore is able to save the Strand as well.

“Someone has got to step up and take a stand,” she said. “This is a part of our heritage and we’ve got to do what we can to save it. Otherwise, we’ll have an empty hole downtown, and nobody wants that.”

The National Weather Service in Mobile has issued a “hard freeze warning” until 7 a.m. Wednesday, for an area including... read more