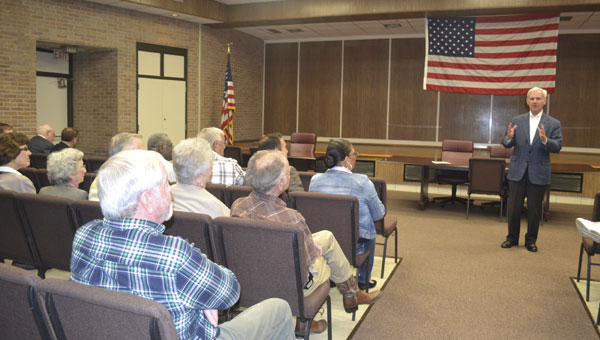 Byrne made a brief introduction and then quickly opened the floor for questions. More than 10 people asked their new congressman about a variety of topics, including the war on terrorism, health care and education.

Byrne was elected in December to fill the seat vacated by former U.S. Rep. Jo Bonner’s resignation in August.

Eddie Tullis asked Byrne if his first day in Washington was “better or worse” than what he expected. Byrne replied that he believes there are lots of people in Washington who want to work together to improve the nation.

“I like the attitudes of most of the people I meet in Washington,” he said. “Even if we don’t agree on every issue, we all love our country.”

An audience member asked Byrne if he was concerned about possible cuts to the number of military personnel, and the congressman was strong in his response.

“This is no time to be rationing down on the greatest defense of liberty in the free world,” said Byrne, drawing a response of “amen” from some in the crowd.

There were about 80 people in attendance at Tuesday’s town hall, which was one of several that Byrne had done in the district that day. Earlier in the day, he spoke at Brewton City Hall.

For more on this story, see the Wednesday, Feb. 19, edition of The Atmore Advance.

HES students Daphne Turner and Rayya Cao have enjoyed using the iPads that the school was able to buy, after... read more