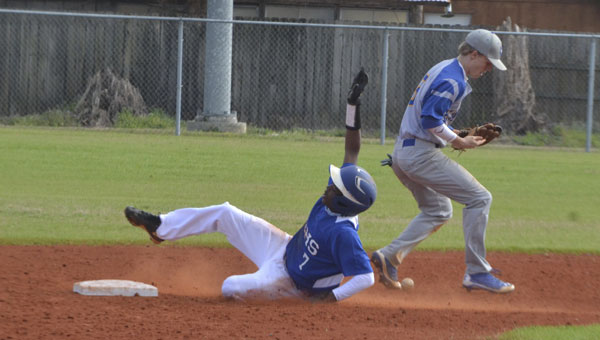 ECHS’s Rashaun Flavors steals second base in the fourth inning of the Blue Devils’ 13-2 loss to visiting W.S. Neal on Wednesday.|Photo by Justin Schuver

W.S. Neal jumped out to a 4-0 lead after one inning and never trailed from there, as the Eagles defeated Escambia County High School, 13-2, in five innings Wednesday afternoon in Atmore.

The Blue Devils came back from an early 4-0 deficit to score two runs in the bottom of the first. D’Andrez McCarthy led off with a single, and moved to second after Devon Robinson laid down a bunt for a single. McCarthy scored on an error and Robinson moved to third.

Robinson later scored on a sacrifice fly by Rashaun Flavors.
ECHS finished with three hits, all singles, by McCarthy, Robinson and Flavors.

Gaetyn Thames led off the second inning by being hit by a pitch, but W.S. Neal followed with a double play. Ricky Reed walked with two outs, but was stranded.

Lane Chavers started the game for W.S. Neal, working 3.0 innings and allowing two hits and two runs, both unearned. He struck out two and walked two. Jared Cooper and Taylor Elliott each pitched a scoreless inning in relief.

The game was originally scheduled for Tuesday but was postponed due to rain.

Heaton hired as coach at Russellville