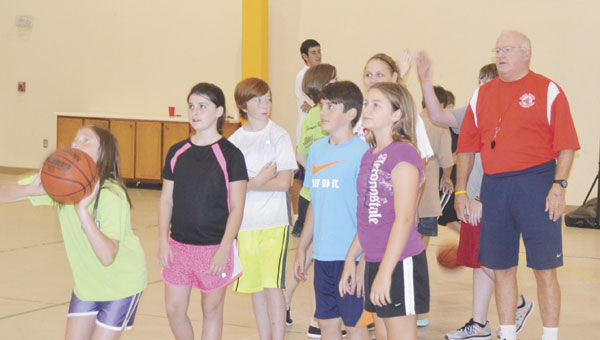 For the third straight year, Dutremble held a basketball camp at First Baptist Church of Bratt. Dutremble and his Global Sports Outreach ministry have put on similar camps throughout the country and in more than 130 different nations.

Tim Hawsey, student pastor at First Baptist Church of Bratt, said that Dutremble and his counselors always do an admirable job with the campers.

“It tells me a lot about what’s in his heart, that he’s a successful retired coach and yet he chooses to spend his time with kids teaching them about basketball and about Jesus,” Hawsey said.

Dutremble is a member of the International Basketball Hall of Fame, and his career includes coaching stints for several college and NBA teams. He was an assistant coach for the Los Angeles Lakers from 1979-83, and earned three championship rings with that franchise. He has also previously served as the national team coach for Belgium, Scotland and Jordan.

Fifteen years ago, Dutremble became a Christian and began his ministry. Since then, his Global Sports Outreach camps have reached more than 35,000 children.

“I love being around the kids,” he said. “Basketball coaching is a gift that I have from God, and I’m happy to share it with others.

“It’s not about making money or anything like that; it’s about getting the kids in camp and using it as a tool to preach the gospel.”

Dutremble’s camp was held last Monday through Friday and 29 boys and girls participated, ranging from 7 years old to 14 years old. The campers worked on basketball activity for 45 minutes, then had devotion and gospel study for 15 minutes, before repeating the same rotation three more times.

Each day had a theme and associated Bible verses — Monday was trust, Tuesday was faith, Wednesday was prayer, Thursday was attitude and Friday was respect.

The cost of the camp was $45 per student, but some children whose families could not pay were given scholarships from the church. Dutremble explained that every dollar of the camp fees goes toward purchasing shoes and basketballs for needy children in other countries.

“We do these camps all over the world,” he said. “Basketball crosses language barriers, and so does the gospel.”

“This is a wonderful camp,” he said. “We not only can help our children, but we can also help missions in nations across the world.”

Cougars get ready for 2014 season