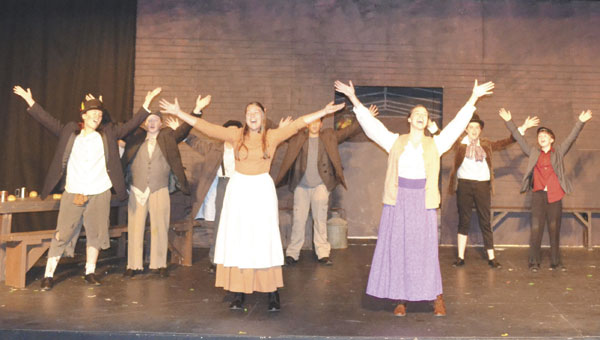 Charles Dickens’ beloved story of an orphaned boy in London will come to life this week at the Greater Escambia Council for the Arts (GECA) theater.

GECA will be presenting Oliver! — the Broadway musical based on Dickens’ novel Oliver Twist — with four performances this week at the theater, located at 100 S. Trammell Street.

Show times are Thursday, Friday and Saturday at 7 p.m., and Sunday at 2 p.m. Tickets are $10 each and are available from cast members and at the offices of Atmore News, located at 128 S. Main St. Tickets are expected to sell quickly, so fans are encouraged to reserve their seats soon.

Phil Johnson is directing the show, which GECA also performed in 2002. Jasmina Stahly is performing the title role, and Jerry Stahly will be playing Fagin.
The full cast includes 87 named roles, as well as a chorus and extras.

Several of the musical’s songs rank among the most-known of Broadway standards, including “Food, Glorious Food,” “Oliver!,” “Consider Yourself,” “I’d Do Anything,” “As Long as He Needs Me” and “Reviewing the Situation.”

For more information on GECA, visit online at www.gecarts.com.

The YMCA is scheduled to close Aug. 29 unless significant additional funding sources are found before that date. After 19... read more