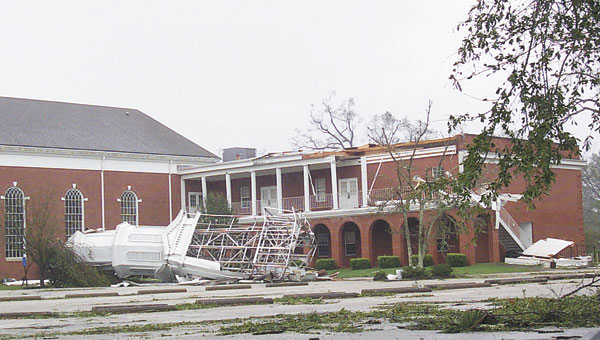 Although Hurricane Ivan changed the face of Atmore 10 years ago, those who remember the catastrophic storm say it also strengthened the resolve of the community.

The massive Category 3 hurricane hit Atmore the hardest on Thursday, Sept. 16, 2004, leveling hundreds of trees and destroying many homes and buildings. Yet those who experienced the storm said the city was truly lucky, because no lives were lost.

“It’s hard to put it into words,” said Howard Shell, who was mayor of Atmore at the time. “It was one of the most destructive events that I have ever seen, and it just literally destroyed our town. But we had people who stepped up to the plate and worked together like never before.

“They began to work at it slowly and methodically until we got it back. The day after the storm, I didn’t think that this town would ever recover, but it did. Home after home was destroyed, but in all of that, nobody was hurt — that was a miracle in itself.”

Glenn Carlee, director of public safety for the city of Atmore, said that the city received help from Americans all across the country. He noted that one company donated 10 generators for the city to use, and even paid for the shipping. Volunteers from as far away as New York and Utah came to help serve meals and meet other needs.

“There were chainsaw crews who came out to help clean up yards and assist those in need,” he said. “It was inspiring to see everyone come together.”

Carlee said that there were countless law enforcement and public safety agencies who sent assistance to Atmore, and that most of them were stationed at the armory. He said the school board helped provide lunches for those first responders from out of town, because the food would have spoiled without power at the schools.

“We were able to offer those hard workers three cooked meals a day and a place to shower at the armory,” he said. “Everybody really pitched in and did whatever needed to be done to get us through it.”

Charlotte Boyle was director of the Atmore Red Cross unit, and helped operate the shelter at Escambia County High School.

“I remember there was a time where the back door blew open and it started pouring rain inside, so we had to get some of the larger boys and men to fight to get the doors closed again,” she said.

Boyle said that she remembers looking for her home after the storm, and not being able to recognize it.

“There was so many trees and debris in front of my yard that I couldn’t even see my house,” she said. “Some volunteers from New York helped to clear away the brush. I was lucky, my roof only had a small bit of damage.”

Shell said the saddest memory of Hurricane Ivan is the fact that Atmore no longer has its large oak trees that once lined several streets, including South Main Street.

“You can’t even imagine how many trees were down, and how many truckloads of trees were hauled out of this town and burned,” he said. “It used to be that you couldn’t even hear a train going through town, because all of the trees would muffle the sound.”

It was all about the numbers at Thursday’s Escambia County Board of Education meeting, as board members discussed the new... read more