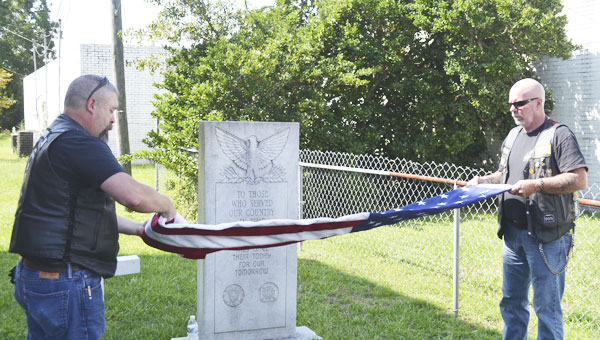 American Legion Riders Scott MacDougal and Bill Ward fold up the U.S. flag at the end of Tuesday’s ceremony at the Atmore Post 90.

Members of the American Legion Riders visited Atmore’s Post 90 on Tuesday morning, to honor those military veterans who were prisoners of war or missing in action.

The motorcycle riders, who came from Mobile’s Post 76 and Fairfield’s Post 137, will be travelling across the state throughout the week, stopping at numerous American Legion posts to raise a POW/MIA flag and U.S. flag. The flag ceremony is in anticipation of National POW/MIA Recognition Day, which is Friday.

“This is the first time we have done anything like this,” said Bill Kilde, one of the riders. “Our goal is to eventually take it nation-wide.”

Atmore’s own American Legion members will be visible this Friday at the intersection of State Highway 21 and U.S. Highway 31, flying POW/MIA flags and other banners to honor those who were lost in battle.

“We’re hoping to catch all of the folks who are going to work Friday morning,” said Atmore Post Commander Paul Chason. “It’s important to make people aware of this special day.”

On Tuesday, after raising and lowering the POW/MIA flag and U.S. flag on a flagpole outside Atmore’s post, the riders then continued on to Gantt, Troy, Tuskegee and Opelika. The riders began their journey in Gulf Shores.

On Wednesday, they were scheduled to travel to Wedowee, Anniston, Guntersville and Huntsville. On Thursday, they will head to Blountsville, Leeds, Sylacauga and Millbrook.

Closing out their journey Friday, they will hold ceremonies in Hayneville, Monroeville and Bay Minette before ending the ride at Mobile’s Post 76.

The flags will then permanently fly at Post 76. In total, the riders will travel 915 miles over their week-long journey.

Prior to the flag ceremony Tuesday, MacDougal presented Chason with a certificate commemorating the day. The certificate reads: “The POW-MIA Flag. This is to certify that the accompanying flag was flown at the Billie Glenn Rushing American Legion Post 90 on September 16, 2014, during the American Legion Riders, State of Alabama POW/MIA Recognition ride.” 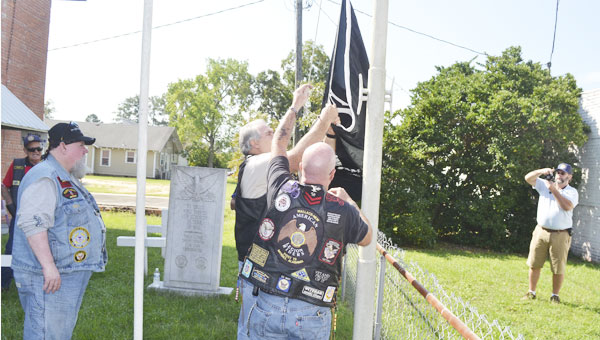 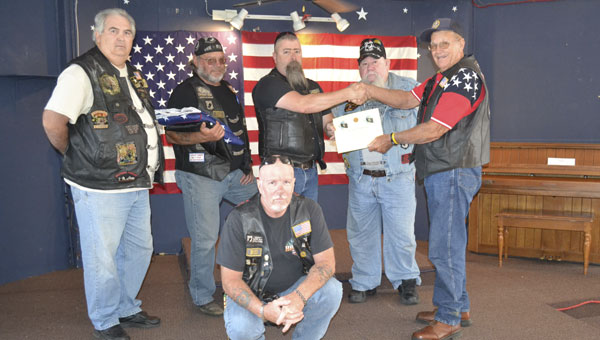