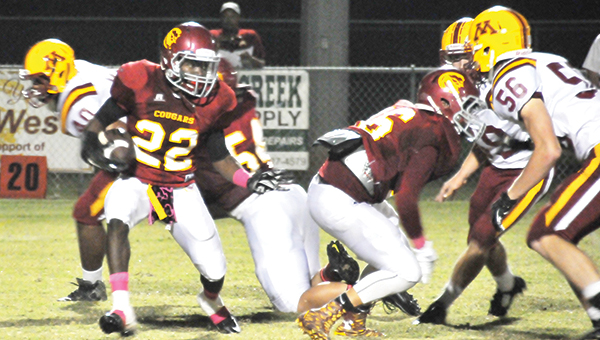 A good running team in Escambia Academy is facing a good up tempo and pass team in Pike Liberal Arts this week in a key AISA Class 3A, Region 1 contest.

“As all of them are this time of year, this is an important game for us,” EA head football coach Hugh Fountain said. “It has a direct reflection on us and our playoff hopes and berth.

If the Cougars (5-3, 3-2) lose to Pike Lib, there could be a possibility that they could not make the playoffs, Fountain said.

“They are an up tempo type of team,” Fountain said. “They like to throw the football. That’s something we’ll have to deal with.”

Luckily, the Cougars have seen the passing attack before.

“It’s nothing new,” Fountain said. “You’ve just got to go in there and be in the right spots and keep the pressure on the quarterback. You have to take control when you’re on offense, and limit their possibility to have possession of the football.”

So far this season, EA has been clicking on all cylinders, not only from a rushing standpoint, but from a passing perspective.

EA quarterback Kainoa Gumapac is a good decision-maker and can run when needed to, if not passing.

Gumapac teams up with stand out junior Kris Brown, who averages some 200 yards per game on the ground.

Not only has Escambia Academy’s offense been rolling along well, its defense has been a good footnote to the season.

Fountain said the team as a whole feels like it’s gotten better as the season has gone along.

“That’s what we’re going to do — go over there and take care of business and ourselves,” he said. “They were a playoffs team last year. They’re fighting for a playoff spot.

“A loss to us, probably eliminates them,” he said. “We’ve got to know from the start of the game that they’re going to fight for a playoff spot. We can only take of ourselves.”

Kick off Friday night in Troy is at 7.

Alabama started out flat against Arkansas during Saturday’s 27-14 win over the Razorbacks, but the Crimson Tide scored 17 unanswered... read more