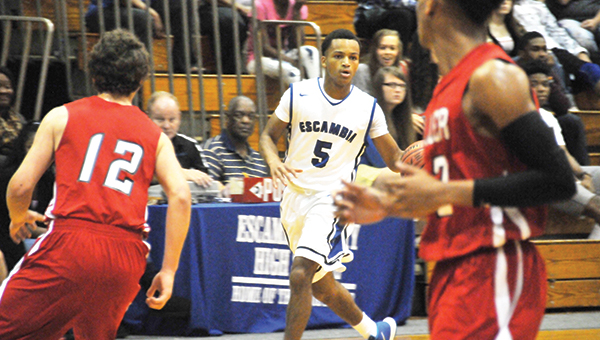 Escambia County’s Triston Knott scored 15 points and Devon Robinson added 14 to help lead the Blue Devils to a 54-41 victory over T.R. Miller in the final game of the Cornell Torrence Tournament earlier tonight.

With the win, the Blue Devils won their annual tournament by winning the most games — three.

Overall, the tournament helped the players because they got a taste of what it’s like to play different opponents leading into area play, ECHS coach Bruce Craig said.

“We needed that win,” he said. “That was a big win. The guys played well tonight.”

Craig said the Blue Devils executed their defensive game plan, which was to press on the full court and play the Tigers man to man.

ECHS improves to 9-3 overall on the season, and will have the next three weeks to get ready for Class 5A, Area 2 play with Vigor and Jackson, which starts on Jan. 5, 2016 at home against JHS.

Knott, who was the only Blue Devil to finish in double figures, drained three 3-pointers and got a few field goals in the first period during the win.

After going back and forth with TRM in the first period, the Blue Devils took a lead late in the opener they would’ve give up.

T.R. Miller’s Chardian Johnson was responsible for six points to get a 8-7 advantage over ECHS, but Robinson countered with a 3-point play to give the good guys a 10-7 lead.

Knott scored two of his 3-pointers in the second period as ECHS built a 20-15 lead.

Later in the second, Eric Williams helped the Blue Devils go on a 4-2 spurt to take a 29-20 lead into halftime.

Craig started a different line up at the beginning of the third period, which included non starters Kentrae Boggan, Virgil Peoples and Trae Thompson, in addition to Williams and Devonté Lee.

The Blue Devils executed their man-to-man defense to hold the Tigers to only 4 points in the third period, and took a 35-24 going into the final 8 minutes of the game.

ECHS held its lead despite TRM battling back to within 5 points during the fourth period.

Williams chipped in 11 points in the win.

Craig said he knew Johnson was a good shooter and kept the defensive pressure on him at all times.

Escambia County won a close game that had an interesting ending over W.S. Neal tonight in the second round of... read more