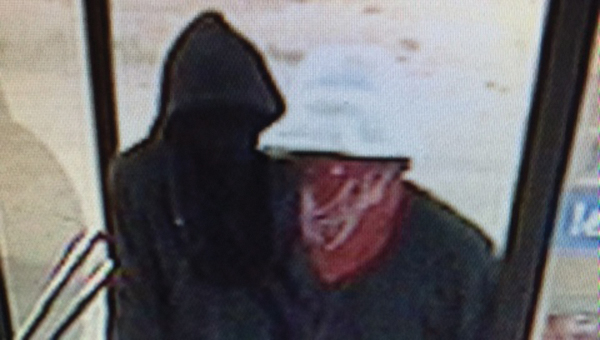 The Atmore Police Department needs your help in finding these two suspects who are accused of robbing the Diamond Oil Station on Monday night. | Submitted photo

The Atmore Police Department is looking for two men who allegedly robbed the Diamond Oil Station on Monday night.

APD Chief Chuck Brooks said at approximately 7:53, the police responded to a robbery complaint at the station on Howard Street.

“When officers arrived, the store clerk advised that two men entered the store wearing masks covering their faces,” Brooks said. “One of the suspects stood in front of the counter and brandished a hand gun. The other suspect ran behind the counter and grabbed close to $1,700 in cash. The clerk then stated the suspects fled on foot from the store.”

Brooks said the clerk wasn’t injured during the alleged robbery.

The Alabama Department of Corrections’ K-9 Tracking Team was called to the scene to assist with the search, but was unable to locate the suspects, Brooks said.

The case is under investigation and the APD encourages anyone with any information to call 251-368-9141.

Brrrrrr… it’s chilly. That’s what residents are saying this week as Old Man Winter reared his head in earnest. According... read more