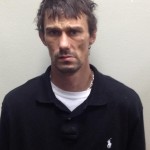 Brooks said officers made contact with the vehicle and initiated a felony traffic stop.

“All occupants were asked to exit the vehicle, at which time officers discovered the driver, Derrick Knighten, in possession of a firearm,” he said. “Officers also discovered precursor items inside the vehicle used to make methamphetamine, and a clear plastic bag believed to contain methamphetamine.”

Knighten was transported to the Escambia County Detention Center.

Director of Public Safety Glenn Carlee is shown with Atmore Mayor Jim Staff, who presented a plaque of recognition during... read more