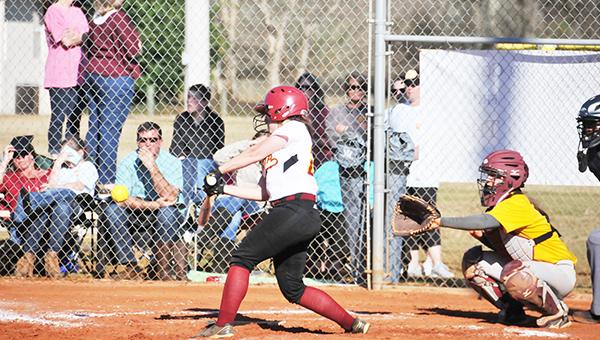 The Lady Cougars fought back from an early deficit to win game one, 4-1, but fell in the second game 12-10 in extra innings.

DuBroc said the girls can win any game this season if they come to play.

“When they’re off, and they’re having a tough day, we struggle. We’re young. That’s what gets us.”

The Lady Cougars scored four runs in the fourth inning and held out in the top of the fifth inning when the game concluded.

Raeven Ramer and Cassidy Murphy went 2-for-2 each; Victoria Sawyer went 2-for-3; and Ashlyn Glick scored a run to lead EA. Ramer hit a double in the win.

DuBroc said it was a combination of good hitting and base running that enabled the girls to score those needed runs.

“We have fantastic base running, but our biggest issue is when we go up to hit, we hit it right to somebody,” she said. “We got the hits to where they were supposed to go.”

With the bases loaded and no outs, the Lady Cougars couldn’t get a run across in the bottom of the sixth inning.

EA popped up for the first out, but the base runner didn’t tag. To end the inning, MA got a double play on a catch in left field to third base for a tag.

DuBroc said the lack of knowledge on what to do in the situation was what led to the loss.

The Lady Cougars had a 4-0 lead in the second inning, but lost it in the third. EA trailed 8-5 in the top of the fourth.

Later in the game, Mary Thompson Lancaster ripped an RBI double to score Murphy to cut the lead to 10-6, and then later scored on a passed ball.

In the fifth, Sawyer scored on a passed ball and Carson Barnett hit a two-run single to tie the game at 10-10.