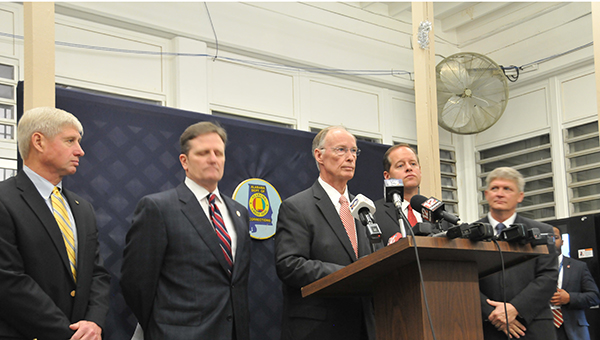 During a post-tour press conference, Bentley stressed that the state has a big problem when it comes to prison overcrowding.

“Alabama has the most overcrowded prison system in the country,” he said. “As well as the people who work here and the wardens, we still have a crisis in the state. This crisis deals with the prison system.”

The tour was held a day after an inmate-on-inmate stabbing that took place Monday morning at around 8:30, and four days after prison inmates assaulted and stabbed a correctional officer and Warden Carter Davenport before overtaking a hallway outside of a dormitory inside of the prison.

ADOC’s CERT teams took control of the situation in both incidents, and an investigation is ongoing.

In February, Bentley’s office introduced the Alabama Prison Transformative Initiative Act. The legislation will provide for the construction of four modern and efficient prison facilities to provide a solution to the overcrowding problem. The legislature is anticipated to debate the bill today.

“We are anticipating that will pass,” Bentley said.

Through the initiative, the ADOC will consolidate 13 of 15 male maximum and medium security prisons into three 4,000-bed facilities. Additionally, if passed, the legislation allows for the issuance in upward of $800 million in bonds for up to 30 years by the Alabama Corrections Institutions Finance Authority with the debt service on these bonds to be paid from savings within the annual budget of the ADOC.

Bentley said paying for these new prisons won’t be a problem because they’ll be more efficient.

“With the new prisons that will be developed and the efficiency of those prisons, they will save us enough money to pay for those bond issues,” he said. “This will be done without costing the taxpayers any more money.”

Bentley was asked to described what he saw during the tour.

During the riot last Friday night, an inmate posted pictures and video on social media.

Dunn said every one who comes into the prison goes through a cell phone sensor.

“Everybody that comes in gets tested for that,” he said. “The CERT team makes searches, and officers do searches and shake downs. We’re constantly looking for all types of contraband, not just cell phones.”

Dunn said how the cell phones got into the prison is a part of the ongoing investigation.