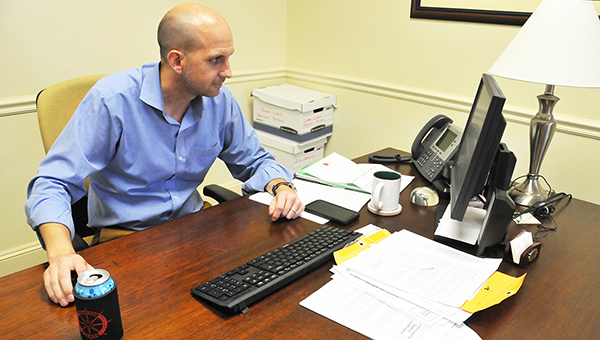 Wes Young is shown at his desk at United Bank. | Andrew Garner/Atmore Advance

Wes Young didn’t want to let an opportunity to learn more about corporations go by the wayside.

Young has been at the Atmore bank for the last two-and-a-half months.

As general counsel, Young will serve as the bank’s lawyer.

“I will manage all of the bank’s legal affairs and needs,” he said. “It just means that I’m going to handle every single legal need the bank has. There will be certainly times where I’ll have to associate with outside lawyers to help represent the bank in litigation or in other legal matters.”

Young said he’d also be handling anything that is legal in nature, from defaulted loans to corporate structure to insurance and risk management.

Before starting work at United Bank, Young practiced in law firms in Mobile and Houston, Texas.

Young said working with contracts is going to be a big part of his job at the bank.

“I do mange all of the contracts the bank enters into,” he said. “Anytime there’s a vendor that we want to hire to do something for us, then I‘ll review the contract. The same thing goes with loan documents. Every relationship the bank has with a customer is contractual. It’s based on a contract.”

Young served as a line officer on surface ships for four-and-a-half year, and did one-year, boots-on-the-ground deployment to the Middle East in support of Operation Enduring Freedom (2011-2012).

Recently, Young affiliated with the Navy Reserves’ Judge Advocate General (JAG) Corps, where he serves as a lieutenant commander. He has been in the navy for 14 years.

Young said the year he served in the Middle East was a long one. He worked in logistics, making sure fuel and supplies got to where they needed to be in the effort.

“I left when my first daughter was 4 days old, and came back two weeks before her first birthday,” he said. “So, it was a long year.”

Jones said Young will be an asset to the bank branch.

“As today’s financial and regulatory environment continues to evolve, having in house counsel gives us the opportunity to stay on top of strategic, corporate and compliance issues,” Jones said.

“The experience Wes brings to United Bank will allow us to quickly respond when legal needs arise and provides an opportunity to be more efficient as we add an in-house resource for our officers and staff.”

Young said being a lawyer has been rewarding.

“I was fascinated with it from the time I was a young kid,” he said about the profession. “I thought it would be a good and rewarding career. It hasn’t disappointed me so for.”

Young lives in Daphne with his wife, Sarah, who is also a lawyer. They have two children, Stella, 4, and Amelia, 2.